Note to the reaper, piss off and collect a few that deserve "collecting". Mr D'uff just related the following...

There’s a certain album that’s been in my collection for 35 years now. Released March 1975 to make sure that my destiny was manifested in an entirely different direction. Rumour has it that a Church of Scotland minister once told my granny that he thought I’d be involved in religion and I think that went down very well. Disappointingly for her and whoever else, he evidently meant rock’n’roll not some annexe of god-bothering.

Anyway, it is an extreme honour to be associated with the DFFD credo and my thanks to Karen and Sal for asking me to recall the time when The Dictators Go Girl Crazy came into my life. Gracias kids!
Posted by Lindsay Hutton at 6:26 PM No comments:

I never knew Alex but met him several times over the years. The first of those was in The Blue Lagoon chip shop at the top of Sauchiehall Street in Glasgow. I think, toward the ends of the 80’s when BMX Bandits opened for him at Glasgow Tech, it’s pretty hazy. Over the years, he developed a very strong connection with Scotland where ostensibly his career was rebooted by a bunch of guys from Bellshill known as Teenage Fanclub. Sometimes, if asked what my favourite Big Star record is, I’ll answer “Bandwagonesque”. Just to potentially rile the person who poses the question. More often than not though, it just gets a laugh.

This is sad news indeed for fans of undiluted music everywhere. There goes another of those “real” artists that they just don’t make anymore. On the times that I met him he was very nice, charming even. He could also be a “wee shite” and I certainly witnessed that though I wasn’t on the receiving end. Davie Scott does a stunning Alex impression that beautifully captures the playful malevolence of the subject. 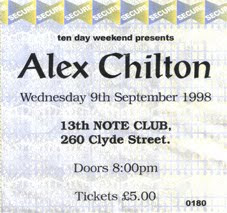 Alex did two of the most amazing shows I’ve ever seen in my life. One, with TFC at the old 13th Note in Glassford Street. It was 1996 and doubly memorable because it was right after our first visit to Stockholm for The Nomads 15th Anniversary when we actually met the gang for the first time. Fiona and Gary picked Avy and I up at the airport and we went directly to the show. Hurry, hurrying and in the throes of going loco. If I close my eyes, I can still hear the apocalyptic version of “Telstar” that the Fanclub and Alx did together. The other was in the relocated, reconstituted 13th Note Club on Clyde Street where the man was in full wind up mode and he, Davie and Francis Macdonald served up a double-fried set that included a systematic deconstruction of “Duke Of Earl” lasting some 8 minutes or so. I think it was prior to this visit that I got a call from Jason McPhail early one morning to say that Mr Chilton was being refused entry to the country at Glasgow airport and did I have any ideas as to how we could get him in. As I recall, Captain Cruickshank came to the rescue citing that he was there to do something for the BBC. In those days you could pull that.

Just a few days ago when in Stockholm, Mr Ulf asked me what year we saw Alex in Berlin. “1990”, I replied and he showed me a bootleg album that could well have been recorded at that very show.

My sincere condolences go out to his many friends, fans and of course family at this time. I’m sure that this has come as a huge, unexpected shock to everybody. If anyone would like to share their memories, I would welcome them here. This guy was another part of the foundations that this thing is built on.

You may also like to look at these photos that Randy posted on facebook and one-time Windbreaker Tim Lee's note from the same resource. I don't know if you have to be on there to view these but I think they're for public consumption. Guess I'll find out soon enough.
Posted by Lindsay Hutton at 5:45 PM 5 comments: 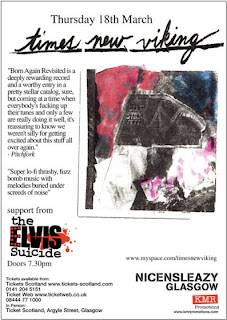 Actually, this is very late – the show is tonight but I was occupied with the Lx news this morning. Still, if you fancy it you’ll be able to get tickets at the door.

Times New Viking at Nice and Sleazy,
Sauchiehall Street in the Weej.
Posted by Lindsay Hutton at 5:40 PM No comments:

Posted by Lindsay Hutton at 5:37 AM No comments:

I sincerely hope this isn't true but just incase...

My thanks to Doctor H for the info...

And so is this... RIP - Charlie Gillett