The e-ma(i)lady lingers on… Friday pm to Monday am with nada computer access would ordinarily have resulted in trauma but recent events tempered that somewhat. Was progress made in other directions? Well not entirely but it did provide time to watch a couple of things that I might have missed otherwise. One was wretched – the Bobby Gillespie/Irvine Welsh thing. This allowed me to vent and fizz in equal measure and underlined why I don’t rate the work of either.

On the other hand “The Night James Brown Saved Boston” was/is an amazing. It’s still on I-Player and I urge anybody that can, to watch it . Detailing events the day after Martin Luther King was shot and how that particular city was saved from the decimation that went on in other locations, a really top notch exercise in the art of documentary.

Later on Saturday, I received my first houseguests of the 2009 season, Aira and Zack of the parish of SF. Headed into Glasgow to catch the Stag and Dagger appearances of St Deluxe and BMX Bandits at Stereo. Watching St. D, I was transported back to Berlin 1988 and that debut performance outside of the US by Mudhoney. They have that sort of dynamic and in terms of noise shapes, it’s all good. Not so sure about the songs to be honest but the band is still in relatively short trousers. No – they don’t wear cut-offs – I mean that they’re only starting out. When they begin to infuse this hooch with their own identities then the fur really could fly.

This Bandits was Duglas and Davie plus the St. D guys. All the D’s in terms of alphabet, but straight A’s in terms of delivery. There was a decisive raunch to the proceedings and an air of the Dolls/MC5 to the outcome. Duglas was in great form and Zack took some photos that will appear here at some point. I’ll have a look to see if there’s anything on youtube too because you really should have been there.

The Aliens (some former Beta band members) followed and embodied everything that blows about the perception of popular music in 2009. Imagine a rave ELP (that’s Emerson, Lake and Palmer) cut with Oasis and Primal Sheep, they’re not as good as that desc. might suggest but they think they are and unfortunately some other people in the room do too so we headed for The Pot Still and left the deluded fools to it. I imagine that the Optimo kids restored some order later on via some of their patented sonic fumigation.

After A & Z left on Sunday, I mithered about whether or not to go into Glasgow for the MFC screening but couldn’t muster the energy being that I’ll have to shell for a new computer set-up in the no’ too distant. I hope that whatever you got up to, and I know that a bunch of you are on holiday today also, went swimmingly too. My efforts this week will be toward restoring to some order to what passes for an existence around here of late.

Meanwhile, here’s some stuff you might care you partake of… 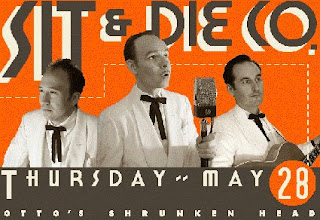 The Eastern Dando? (Thanks to Bill Gibson for this link)

The Rt. Hon Duane Sherwood is caretaking So Many Records… let him clue you in…

Hi, Just a quick note to let you know that for the next week or 2, I'll be manning the helm at the blog known as "So Many Records, So Little Time". normally run by Kevin Patrick, it takes a different 45 rpm single each day & presents the song as a file to listen to as well as the story behind the record, sometimes personal, sometimes historic.

While Kevin keeps mostly to the rock & roll side of things, I'll be doing strictly Jamaican singles from the '50s - 70's for my stint. It starts tomorrow (Monday) and continues until he wants it back, that could be 2 weeks max. I'll be sick of this by then anyway...

Hope you have a chance to check it out. Regards, Duane

With all that to contend with, and another instalment of Kicksville 66 up, you won’t be missing my piffle one iota.