Stands to reason doesn't it. There's more (alleged) music on TV these days at a time when it seems to be well down the priority list despite the ipod ownership. And no wonder. It's almost uniformly duff and seemingly scheduled by the ailing music business. Wouldn't it be something for there to be some objectivity from the presenters too? Like they could cut away from some honking set to see everybody holding their noses or holding up a card with "stinker" sharpie'd on to it?? Never gonna happen but think about how great it would be if there wasn't all the fawning and hard-sell. Would it be such a bad thing to express an opinion? Just one??

It's my own fault I know but I like to see and hear what's supposed to be popular. That creates a perspective for me between what is and what, in my opinion, should be popular. Just because this stuff is peddled en masse doesn't mean that it's actually popular either. HMV did a mailout today trying to capitalise on the LiveArse thing. Selling product by the artists cheap that included the Al Gore documentary. This was the dampest of damp squibs, these things simply don't work anymore. The world has moved on, not too much further but maybe 100 yards or so.

Even Spinal Tap wasn't as exciting as the prospect of them appearing but it was OK. I read some report about how they has falling rocks as stage props. Dearie me. You just expect people to be cultured. If the drummer had "exploded" at the end, now that would have made all the difference. However, being introduced by Marti De Bergi was a nice touch, irrespective of carbon footprint considerations. And why did the BBC cut away as they went into "Big Bottom"? Would the expression "bum cakes" cause the nation to run amuck?

And as I sit here The Fratellis "Chelsea Dagger" is blasting into the ol' bunker from Nedstock™ (courtesy of Mr McLean) and it's all very perplexing and so very, very dull. I'd really like to have seen a couple of songs by The Skids but you possibly have to have that cable or satellite caper involved so I'll wait for YouTube.

Another weekend over, running on fumes and careering toward the inevitable. Need to go and look out my Martin Rev albums, inspired by the fact he's playing in San Francisco on July 26th.
Posted by Lindsay Hutton at 9:15 PM No comments:
OK let’s cut to the chase, some music that will blast away the cobwebs of anything you’ve seen on TV this past few days. Masquerading under the banner of a cause or just playing for maximum bucks in a muddy field. I’ll take that back if HS end up on TV next weekend but until then… as always, myspace links are provided so, no need to take my word for it, even although you should.

The Shorebirds “The Heavy Hands of Hunters”
(Groover Recordings)
From Brooklyn, this combo have the chops and the songs to cut quite a dash. Like Rank and File jostling with primo Cockney Rebel. Mark Ephraim’s vocal has a kind of “Steve Harley” enunciation. There’s an understated glam-ness that’s a little Luna and a nice line in understated almost country tempo. This makes them quite contemporary and equally appealing to fans of groups like say, The Pixies. They don’t do the quietLOUD thing because they don’t have to. The fairground pulsebeat of “We Want It Bad” sounds like it would have been a 45 on Island Records around 1975. “If you don’t understand then get in the van”, ha ha, great. “Hovering Light” will appeal to fans of The Strange. It has that Dire Straits via The Modern Lovers vista. Roxy Music is mentioned in their roll call of influences and I can hear that too. It’s the early stuff though as you’d expect in such an esoteric setting. The Shorebirds emit a warm glow that I could hear echoing through darn big venues in years to come. Nice booklet art on quality paper too so this comes from a place that goes that wee league extra. Of course you expect a quality product from Groover and they never let you down. And I don’t think these Shorebirds will either.

Grand Mal
“Congratulations You’ve Re-Joined The Human Race”
(Groover Recordings)
Bill Whittlen was in the band St Johnny. The longer in the tooth of you might remember them being signed to Geffen something like 14 years ago. I recommend a visit to the directors cut of the bio to get the full picture. It’s quite the long winding road to get us here. Character building even. So anyway, this is a very New York record. But Max’s as opposed to CBGB’s if you get the gist. It tells a story like a Lou Reed album used to. It retains an opulent Velvets-like romanticism that’s long since been hosed off the streets of the city itself. “Cold As The Stars” has a lush, bleak beauty and “You Should Be So Lucky” explodes off the back of the final piano key stroke. Like Teenage Fanclub going T.Rex. In fact there’s more than a touch of Bolan about the whole album but not in an obvious way. In more of a spiritual sense than any sense of copping a style. This is music that is very much out of time. I think it’s the piano driven nature of many of the tracks. It doesn’t sound old but it feels weathered and thus reflects an authenticity that much of today’s disposable, flash in the pan, 15 minute wonders could never hope to capture. No matter what producer they care to rope in.

The Double Agents “Seemed Like A Good Idea At The Time”
(Infidelity Recordings)
Dirty country blues with a shot of Scientists dynamic? Oh yes and if you too are leaning toward the affirmative then this Melbourne combo will be your tipple of choice. This kind of finite garage isn’t as easy to pull off as it may seem. I like the way they alternate vocals between Kim Walvisch and Dave Butterworth. It keeps the album from seeming like a race for the finish line. “Wasting My Time” has a great Sticky Fingers-y Stones swagger to it. “I Won’t come Running” reminds me of US variety X while “You Make Me Feel” is sparse, atmospheric and verging on total disintegration. Somehow the expected crescendo never manifests itself bit it comes un-nervingly close. Greg Cartwright’s “Sour and Vicious Man” is the only cover on the album and it fits snugly with their oeuvre, if that’s not a contradiction. Must be a damn good night out to catch them in person but for now this’ll have to do those of us outwith the Antipodes.

The King Brothers “Blues” (Infidelity Recordings)
According to Eric Oblivian “The King Brothers are the best rock’n’roll band in the world”. I’m not altogether convinced that it’s possible to capture the sheer insanity of the real thing on a wee shiny disc but “Blues” is a good shout at attempting to try. Not that I’ve seen them, other than on the live dvd that accompanies this album. What on the face of it seems like the apocalypse raging out of your speakers, The King Brothers register a strange kind of restraint to inject a twisted Detroit soul transfusion amidst the cacophonous racket. Of course, in time honoured tradition they’re not real brothers in the biblical sense. They are however bonded sonically by an almost pathological disregard for making the listener comfortable. There’s nothing coffee table about this, unless you plan on wrecking one. I’m not sure it would be safe to drive with this on your player either, unless you want to get someplace very fast. Adrenalin levels need to adjust to this “rock’n’roll from the future”. Look what happened to The Ramones within 30 years, it’s a strange old world and “69” sans the “19” takes high energy into a whole different scale of voltage. This is the real “new rave”! I think my poor cd player is in shock.
Posted by Lindsay Hutton at 4:27 PM 1 comment: 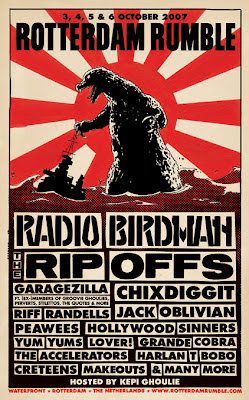