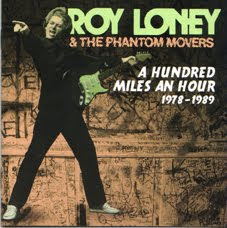 The wonky road of musical appreciation has never been more twisty and turny than it is right now. With the appetite for back catalogue the way it is, there’s precious little that isn’t available. Strangely though, it’s taken to until now for Roy Loney’s post-Groovies gear with The Phantom Movers to become available, at least officially. Which seems odd because certainly the Solid Smoke EP and album are fine, fine examples of a guy and his band just letting fly. The way only Roy knows how. Raven Records of Australia have seen fit to brandish this material on a compact disc-shaped document entitled “A Hundred Miles An Hour 1978 – 1989”.

These 28 tracks includes all of “Out After Dark” except strangely the version of “Rockin’ in The Graveyard” and “Trophy”. There’s nothing from “Contents Under Pressure” either. Still, the upside is that it’s all primo Loney that runs up to Norton's “Scientific Bombs Away”. His recent reunion with Cyril Jordan have been joyous celebrations of the healing powers of yer real rock’n’roll. It’s a pleasure to see this guy in action and if you haven’t been able to do that then at least now you can hear a bit more without having to scour ebay or wherever. Icing on the cake is Dave Laing’s liner notes, he’s a guy that knows a thing or three about this kinda hooch. 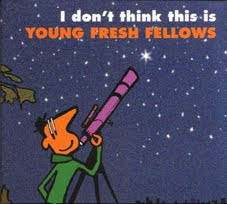 And with the weather acting up the way it is, more music of the type that satisfies like a hearty casserole is in order and that’s where the Young Fresh Fellows “I Don’t Think This Is” comes in. I first wrote about these guys in something like 1985 or something like that. They’ve been in hibernation but have awoken and mean business like always. “Betty Let The Good Times Crawl” is that rare thing in these faux detail times. This Rock & Roll Inc. version of the album is different from the Yep Roc release, "I Think This Is". Consult the websites for details, that's what those links are for.

“New Day I Hate” could be The Fastbacks and should really get the kids from Spain working up a sweat during the upcoming shows out yonder. The Fellows are archetypal exponents of fine pop music, purveyors of the meatiest beats and swingin-est tunes available in this of pre-packaged 21st century. It’s impossible not to have a dirty big grin plastered across your face when you’re listening to them. I imagine that seeing them play might just be too much for anyone with a dicky ticker. I’m wondering if “The Final Tractor” is any relation to “The Final Taxi” right about now as I know these folks have played with Mr Eric Goulden during his forays into the Pacific Northwest.

Robyn Hitchcock has prepared a perfect power popping crunch and twang marinade. “Lay You In The Ground” sounds like something The Nomads might like to tackle. “If You Believe In Cleveland” is a hymn to an oft-maligned state that’s given us some seriously great art over the years. The Young Fresh Fellows may not be so youthful at this juncture but they’ll show just about any, no make that any, combo of lesser years a clean pair of heels. These fellows are sounding fresh alright. You can take that in the old fashioned sense or the hippity hop appropriation. It’s all good. Wonder if they’ll do “Teengenerate” live? 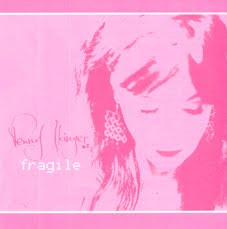 Back down under for a cracking little 3 track limited edition (of 500) taster EP by Penny Ikinger entitled “Fragile”. Ms I’s credentials put her in the antipodean rock first division. The sitar-centric, Traffic-like take on “All Tomorrows Parties” gives the song a crucial twist out with the generally faithful boundaries that a cover would usually take. Ron Peno’s duet on “Memories Remain” are a wee bit Nick Cave-like but once you hear it a couple of times, that’s not a problem. I’m not a Cave fan so it might just be me.

The title song is not unlike The Hummingbirds with some serious rock action squalling through and around the basic classic chassis. Kylie goes Magic Dirt even. Penny should have someone present it as something to consider for the next album by Ms Minogue. She must be in the market for a good tune that could reinvent her, right?

Just don’t let the manky street preachers anywhere near it and we're sorted.