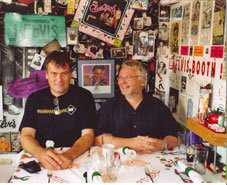 It is with considerable regret that I report the passing of my friend, Lennart Persson. I know that some of you know him but for those who don’t then let me explain some. I don’t think that anybody would argue with the fact that he was probably the foremost music writer in Sweden. He lived and breathed the stuff and was that rare breed that never let ego get in the way of his resolute fandom. Starting out with Feber, it was my pleasure and privilege to be able to consider him part of this extended family. The few times that I was able to hang out with him were very precious.

Of course, until recently – I figured there would be many more.

He recently launched a website to collect the many strands of his professorial work and did me the honour of asking me to contribute to that. Lennart was the Dean of all cool things and always a staunch keeper of the rock’n’roll flame.

I spoke to him 2 or 3 weeks ago, just after sending him a copy of Barney’s Tom Waits book. He’d been looking forward to reading it and I hope that doing so, in some way, took his mind off what was happening. Another thing we shared was being fully signed up members of the Annika Norlin fan club. This guy’s taste was impeccable. All the way.

We had hoped that he’d make it out here to Kiltland this summer for a return bout of the Glesgae culture with his tag team companion Mr Hägred. Before fate dealt this mortal blow, he should be in London right now with Mr Ulf having watched Nick Lowe’s stonking Albert Hall performance last night. It’s a cruel reality indeed that takes him from us on that self same day.

Actually, if it wasn’t for Ulf then I probably wouldn’t have met LP anyway. I should mention a bunch of other stuff like Music and Konst, The Nomads, etc. but the technology precludes all that right now Lennart was a fella that made a difference. He set a high standard that so many are just not capable of. Myself included.

In addition to all this, he has a family and I can’t even begin to understand the depth of their sorrow. His wife Bera, his kids and the grandkids and I didn’t know this until yesterday but his mother is still with us. My thoughts are very much with them at this rotten time. At least he’s not suffering and if I know LP, he’s probably looking up Lux right now.

So long pal. You may have left the theatre but you will never leave our hearts and minds. Not ever. Lennart Persson - a “God Only Knows” guy if ever there was one.

Photo by Avy Carroll - Mr Hägred and LP in The Elvis Booth.

Please leave messages in the comments section and I'll make sure they get passed on.
Posted by Lindsay Hutton at 7:42 AM 5 comments:
Newer Posts Older Posts Home
Subscribe to: Posts (Atom)