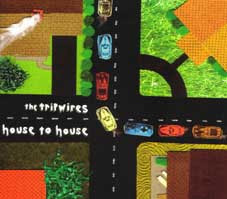 The Tripwires “House To House” takes equal parts Big Star and Squeeze and fuses this with a little NRBQ-drizzled XTC. This superior pub pop strain is a product of the individuals concerned being rampant anglophiles. That’s just a guess you understand. Just as the sixties garage bands inverted what was heading out from England, the result is closer to The Raspberries or the Groovies.

Teenage Fanclub aficionados will also find much to love here. A “supergroup” of sorts... The 'wires feature Pacific Northwest alumnii Jim and Johnny Sangster with Mark Pickerel and John Ramberg and you can find this stellar collection at Spark and Shine. That’s a label not a street corner and the music does possess both of those qualities. “Ned Beatty’s In Love” as a title alone has to have tweaked your interest buds, right? And “Dismantled” has a roots Rezillos thud that should paint some kinda grin on your coupon.

“HTH” is a solid sender all the way through its twelve tracks with possibly “Look At It This Way” being my favourite. If you aren’t smitten with that then I can’t help you. Overall it’s like a 21st century Brinsley Schwarz and you know we need one of those. 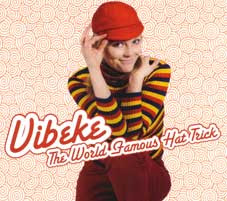 “The World Famous Hat Trick” by Vibeke Saugestad has been out for some time now but I only just got a copy from the lady herself. Regular visitors will be aware that The Yum Yums blew me away in Spain recently. Guilty as charged. These crazy kids have the power to make the most died in the wool cynic believe. As well as being part of that combo, Vibeke has her own career in the topsy turvy world of pop in conjunction to this. Coming out of the traps with two songs like “He’s Peculiar” and “Keep On Dreaming” is something of a 1 – 2. They’ll knock you flat on your back. After that she could have gone for the easy option of taking her foot off the pedal but no.

This fine, fine product features the one and only Morten Henriksen who, it has recently struck me, is the mack daddy of the post-Ramone-ic sound here in Europe. I’ve heard the expression “bubbly” be applied to pop gals but Ms Saugestad is a bright shining positive force for music as therapy. Her voice reminds me of my friend Mary Lee Kortes and that’s never a bad shout.

This CD is out on Pop Detective now with additional tracks. It’s also on vinyl via Screaming Apple (order via Soundflat).

I thought that the lyric in “He’s Peculiar” was “watching the snow fall listening to Mud” which would have been too perfect but not out of the question given that this young lady, who really isn’t old enough, is a big Slade fan. Turns out that it was "Muffs" which is almost cooler, so while we’re on the subject grab the album and her Christmas EP in one handy mailing from CD Baby.

“Hat Trick” has been on heavy rotation since it arrived and shows no signs of loosening its grip. It may just get tighter. Great songs performed with an extra dollop of gusto. Guaranteed to deliver that heart punch that will make your ticker race, if it doesn’t then I’m not sure that you’re in the right place. You probably rate The Strokes. Here’s the young lady in action in case you have any reservations... 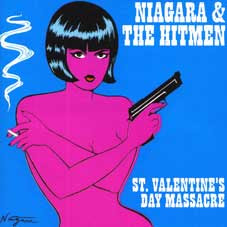 Niagara and The Hitmen pairs the Detroit chanteuse with Sydney’s finest to create a document of what was obviously a heady night down under on February 23rd 2008. Steel Cage has issued this sonic documentation in the form of “St Valentine’s Day Massacre”. Fitting really because it was that very continent that arguably brought the motor city to the attention of the world at large via Radio Birdman. Other groups from closer to home may have cited The Stooges but nobody actually sounded like them.

This is warts and all, howling at the moon rock. It hasn’t been patched up and is all the better for it. Sydney’s finest provide the perfect ballast for Niagra’s holler. You may think that the idea of yet another version of “Little Doll” or “Real Cool Time” is pushing it a bit but chances are that you’ve never heard them like this. Even if you were there.
Posted by Lindsay Hutton at 3:56 PM 1 comment:

Kid Congo and the Pink Monkey Birds review from the other night at El Diablo.

(Thanks to Alan for the link)
Posted by Lindsay Hutton at 6:39 AM No comments:

KP found this little gem, swingin' stuff from Amsterdam - feels like it was shot by David Lynch. This was the A to Z factor in full, ever-lovin' sensurround.
Posted by Lindsay Hutton at 5:52 AM No comments:
Newer Posts Older Posts Home
Subscribe to: Posts (Atom)