A book on the history of Television is something this world could well use, 'cause bein' one of the finest bands to emerge in the 70s their tale is still seriously under-documented. So it's just too bad that Tim Mitchell's attempt is just that, an attempt.
With no direct info from the main players Mitchell has to make do with quotes from other people's work. Sure, the general outline is there, and the author seems to know his stuff by and large, but in the end this book is in serious need of a heart and/or vision, as the text fails to ignite the kind of excitement the book's subject was able to. Besides, overlookin' the release of Little Johnny Jewel is inexcusable, and statin' that Andy Johns produced Goats Head Soup is plain ol' ignorant.
The book claims to be an "illustrated history", but all you get is a handful of gray record/CD sleeve reproductions. Did I mention the "selected discography"? If you wanna know about Television, you'll have to listen to at least a dozen versions of Marquee Moon and Little Johnny Jewel as documented on a pletora of bootlegs to get a sense of the band's mighty improvisational skills, and a guide to these recordings would have been very useful.
Like his book on Jonathan Richman, this is comes in handy, but only until the real thing comes along...
Posted by Jeroen Vedder at 11:11 PM 3 comments: 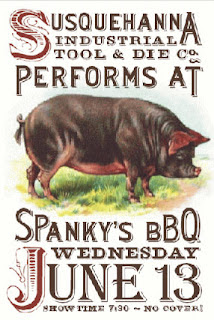 What's that? You say you've been looking for more mid-week, mid-evening, midtown Manhattan amusement? Okay, so we didn't say it either. Yet, Susquehanna Industrial Tool & Die Co. still cordially invites you to join us this Wednesday, June 13th, downstairs at Spanky's BBQ in Times Square for an evening of "ballads, boogies & blues" and all the fixins' -- whether that be merely a cold beer or a full-on barbecued feast. And we'll be joined in the cozy, countrified confines of Spanky's by our special guest singer Rosalie Morris!
WEDNESDAY, JUNE 13TH / DOWNSTAIRS
@ SPANKY'S BBQ / FREE! /
127 West 43rd Street (between Broadway & 6th Avenue), NYC / One hour show at 7:30 sharp,
followed by the Rob Ryan Band /
Yours truly, Michael
Susquehanna Industrial Tool & Die Co.
"Ballads, Boogies & Blues"

Posted by Lindsay Hutton at 7:49 PM No comments:
It was good that J got that Patti thing together yesterday. It made up for my inability to post which was down to my trying to keep away from the computer. That meant a wee stint in the garden and a longer one hunting for stuff. Why the hell have I been horde-ing all this stuff? The first thing would be to hold an ebayathon but I don't really trust that anymore, too many chancers. But what other way is there? Sure there are other "auctions" and plenty of "dealers" but this crap is somewhat specialised and some of it's not actual "crap" but good gear that really ought not to be hiding in boxes and cardboard tubes.

And to add to all this, I just watched the last Sopranos episode and am somewhat dumbfounded. In many ways the ending was perfect but it's over. This will do for Journey what South Park did for Styx. The "music beds" also included "You Keep Me Hangin' On" by Vanilla Fudge, good score. Of course, the perfect song to have rolled over the closing credits would have been Parlor James' "Hell To Pay" but I guess you can't have everything...
Posted by Lindsay Hutton at 7:12 PM No comments:
Newer Posts Older Posts Home
Subscribe to: Posts (Atom)