It was my intention to get more done on here today but there have been some obstacles plus my contacts info is in some disarray. My intended schlep to the cinema tomorrow may go by the wayside as a result. My arms bear the marks of a potential self harmer due to the ongoing tussle with the out of control hedge. It was cool to come in and relax to the strains of Bruce Anderson's "The Inherent Beauty Of Hopelessness". More about that later.

It's been unfeasibly warm here today. I don't function well in such conditions. I'd like to, but don't have much practice. In keeping with the regime of not spending hours upon end in front of this thing I'm about to sign off for the evening. Have a blast, whatever you're up to. If you find yerself in NYC, the inimitable Amy Allison is at Banjo Jim's. Onstage at 9pm.
Posted by Lindsay Hutton at 8:49 PM No comments: 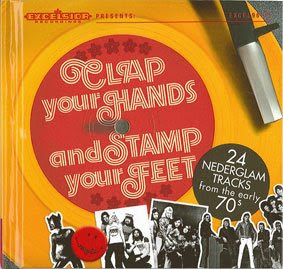 It’s no secret that I consider glam to be the last great golden age of outright teenage pop that rocked. True, it was often created by brickies in make up but that gave it an extra edge. Robin Wills “Pure Pop” blog has spearheaded the pebblefication of bringing material back to life that had little or no profile in the first place. We need to thank him for that. In many ways it was punk rock before that kicked in as a catch-all brand. If you prefer Spandoo Bollocks to Mud then well, you simply shouldn’t be here. I don’t mean on earth – live and let live – but not here amongst us.

The content of “Clap Your Hands and Stamp Your Feet”, the Nederglam comp lovingly curated by Prof. Wills and Dutch Special (Rockin’) Forces General, Jos de Groot brings that ruckus back into sharp focus. And, before we get to the contents - this is the sharpest dressed release I’ve seen in a long time. It comes in a bijou hardback book with extensive liner notes and pictures. This might make it a little pricier than your common or garden jewel box but you get what you pay for and this is high art on the proverbial multiple plateau my friend.

Every one of the two dozen selections sounds like it could have been recorded under perfect laboratory conditions yesterday. Big crunching licks and unstoppable choruses. Bonnie St Claire and Unit Gloria are a collision between Suzi Quatro and Abba in a way that could never be pastiche. They mean it chief. Actually they make me want to go and put on a Smashed Gladys record.

Maybe this stuff just hits home because this is the trajectory that I joined the music bug as a teenager. This was punk rock, as was The Groovies, The Dolls, The MC5 and The Stooges. I guess it was all about power then and this shakes some action a whole lot more vividly than much of what came out in ’77. The Heavy Dwarves “Moeder Natuur” actually has a contemporary rave commotion indicating that the sound which baggy approximated wasn’t entirely new either. At some point, I’ll try to explain why I think that Happy Mondays were better than the excrecable Stone Roses. And not just because they covered John Kongos although that was a masterstroke. Anyway, there are precious few comps that are this wall to wall great in excess of 70 minutes. Is Pantherman Holland’s Kim Fowley?