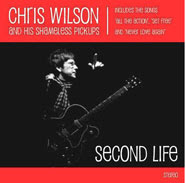 Here’s Brother Patrick’s angle on the brand spanking new Chris Wilson and his Shameless Pickups album, “Second Life”. The review was done in one take, no overdubs, so run with it OK?

"Second Life" kicks off with the high energy, should be all over the radio (if there still was such a thing) “All The Action” followed by “Shake That Feeling”, the end of which sounds like it was recorded in a cathedral.

“Sweet Deceit” establishes a kind of ”Harlem Nocturne” mood. It’s a beautiful mid tempo number with great sax parts like Mink DeVille circa “Return To Magenta”. An irresistible slice of soul. “Set Free” has an “all along the watchtower” intro and soon turns into something that sounds like the Barracudas at their very best.

“Never Love Again” is a re-recording of the poignant ballad from Chris’s 1993 LP with the Sneetches. “Blaze Away” is another anthem and that’s followed by a cool country tune called, “Rise”. The title cut is a very appropriate and hopeful title. I’d swear I hear real violins as it evokes a tragic mood like a cool Shangri-Las song.

“Under The Power Lines” takes us down a Memphis blues route and “Visions Of Johanna” is the only cover version. “While There’s Life” will slap your callow cheeks, make you weep and set you up for the next set of songs that are coming your way soon.

The stylish cover photo action by Ann'Arbor perfectly reflects the music which is a welcome antidote to those records that promise but never deliver. Chris and co have created some good vibes here (big kudos to Anthony who wrote many of these songs). It’s a real 'aftermath', as good and varied as “Exile On Main Street”.

No matter how many lives you’ve had, this could change your present course…