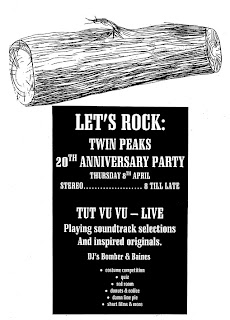 Posted by Lindsay Hutton at 5:31 PM No comments:

This has turned out to be a resume of the week. Folks have been dropping by to read Ben’s piece on Alex so I deliberately held back the flood gates so that they wouldn’t have to wade through acres of me doing my LD bit to get to it. Having stuff like that to put on here is both a thrill and a privilege. You can read it over at the BV site and while you’re at it maybe grab copies of his latest recordings. Everyone a Rambler 65 (as opposed to maserati). Writing of that calibre also makes me forget (briefly) that I was put here for better things than some of the shit I’ve had to contend with over the past few days. I have that Friday afternoon mellow feeling but am aware that this weekend is an hour shorter. That could easily get my hackles up if I dwell on it but at this point, said situation is some way in the distance. Even factoring in the speed at which one’s free time scoots in like the proverbial rocket. So at this juncture, we’re all alright.

Is the browser problem still happening to you? I thought I’d fixed that. Perhaps I need to upgrade to one of these generic templates but don’t really want to.

Tuesday pretty muck sucked part from that. Mainly down to a shenanigan with my trying to renew my road tax. First online, then on the telephone. My insurance details aren’t on their database so they couldn’t process my application. To find this out, I had to go through the automated sequence from hell eventually talking to someone. Only to be faced with “computer says no” indifference. Once I get all of this sorted out, I’m going to tear the DVLA Customer Relations dept. a new one. Via the good old postal system with an envelope and a stamp, the whole nine yards. I imagine that I should just file that under “these things are sent to try us” but it utterly hacked me off and someone must pay.

“It’s just computers” (I swear, that's what she said) and “You’ll just have to go to a post office” were the indifferent statements that made my blood boil when I called the agent with regard to why said info wasn’t coming up on the database. I thanked the person "for being of no help whatsoever” and hung up, stopping just one smidge short of spontaneous combustion. The bisom's tone was what really capped it off. I know computers are a pain in the rectum but I don’t expect the representative of a place I’m paying to provide a service to just fob me off.

The expression curmudgeon applies to me. Guilty as charged. Not being one of life’s bubbly go getters, I hope that I don’t portray a number of faces to suit any particular situation. Having said that, if someone asks me for help, or advice or whatever then I’ll do my damndest to do what I can. An ethic that seems to be in short supply this last wee while. If someone pisses up my back and tells me that it’s raining then woe and at least thrice woe betide them and the tussle with the broker’s representative was one of those. Like a follow on from the DVLA run in from last night.

These droids are not programmed to operate out with a radius of being a dimbulb. Is it too much to expect to get some service? A couple of answers?? I don’t think so and all of this fucked me right off. The start of the week had been pretty reasonable. It never occurred to me that I might be overdrawn at the karma bank.

There was the hooking up of some Wild Horses fans with some 30+ year old signed photos. The catch was that they donate something to a charity of their choosing. Conscience will be their guide. This is perhaps some more of this rock’n’roll ministry practice showing itself or maybe I’ve lost the plot altogether. I had also reconnected with folks that I should have never become disconnected with in the first place. A peculiar twist of fate with an outcome I never expected.

In closing, I will indeed always “go to the post office” in future because there you can get stuff done. The DVLA can jolly well stick their “online” service where the sun divnae shine. Laminated and torn sideways for extra sensitivity.

Anyway, it’s very gratifying to see the press on the new Mose Allison record and also that Amy is being recognised as having made a very cool contribution both on the duet “A New Situation” and her dad doing “Everybody Thinks You’re An Angel”. The people who are writing about “The Way of The World” seem to be blessed with a sense that eludes your average “Americana” or whatever scribe that trots out the generic ignoramus reaction to her instrument. The “Before Mose there was nothing” lobby must be thrilled that this new album is finally out.

Let’s see what else, I’m chuffed to have made Amy Rigby’s diary. I think she’s kidding about the “cheerier film” bit. Also in recent times, I swelled the ranks of The Beat Army so I’m not doing too badly. They’re reporting here today that the price of alcohol is being raised to save lives. Is the government really that stupid? There are sections of society that don’t fucking eat because they’d rather neck booze for whatever reason. So now they’ll eat less. The money will be diverted to the health service or something. Aye. Right. Are you familiar with the expression “shower of bastards”? I dare say you are. I know that the Rev. Thewlis is spitting feathers .

Got a loan of some Bonanza DVDs from a colleague recently and was immediately blindsided by the fact that they don’t start with common theme tune. Is nothing sacred? Guess not.

Thank the lord then for Bucks Burnett’s Eight Track Museum... (thanks to Martin for the link)
Posted by Lindsay Hutton at 4:04 PM 3 comments:
Newer Posts Older Posts Home
Subscribe to: Posts (Atom)