Still battling this cold and reckon that these olbas hankies are making it worse. The elixir itself is good for clearing the heid. These are not but they do paint an amusing looking red blotch around the nasal region. I was out of the game last night. Woke up around 10.45pm and decided that I should probably be asleep. This morning was a bust too and I expected the lurghi to engulf me completely but I dragged myself out and don’t feel quite so gubbed. This has no bearing on whether I’ll pass out again though.

While I’m vertical, I should deal with some e-mail...

And finally... it’s that time again. 33 x 365 (12045 days) tomorrow (April 1st) since a certain half-arsedly photocopied rag modestly christened “The Next Big Thing” made its way into the world. Happy birthday to us.
Posted by Lindsay Hutton at 5:46 PM 3 comments: 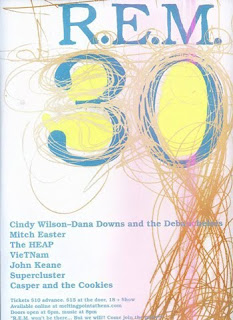