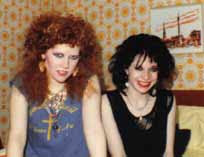 Just a note to say that while the archive thing isn't working, if you type what you're looking for into the masthead at the top LH corner of your screen then that should come up with what you're looking for. All attempts to contact "Blogger" have failed thus far so i've no idea when things, if ever, will be rectified so that's yer lot for now i'm afraid. Been meaning to post that there photo for a wee while now. Ivy and Nina Antonia circa, I think, 1981 in Liverpool.
Posted by Lindsay Hutton at 4:20 PM No comments: 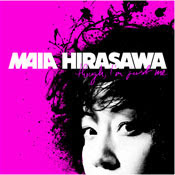 So it’s Sunday afternoon and maybe it’s time for something that’s a little more sedate. Something to stave off the thought of Monday. And there’s nothing better for that than Maia Hirasawa's debut album "Though, I'm Just Me" on Razzia. The title is something of an understatement. There's a broad base of potential appeal here which straddles your average demographic. In Maia-world, you can take a step back and just let the classic pop craft do the work. Her exotic accent is a result of being Japanese, living in Sweden and singing in English. This album contains 11 songs and is out on April 4th.
Some of them might be familiar if you were lucky enough to snag a copy of her self-released EP but appear here in different form. The brass sound of “Parking Lot” is immense yet understated and goes straight into the first single “And I Found This Boy”. As fresh a swinging girl-group anthem as you’ll come across. Check out the video on YouTube. The kind of sound that airwaves were invented for. It’s a mature album for a debut. You’d think she was an old hand at this game. It has a kind of Cocteau Twins texture to it in places but more conventional. Something that can engage the listener rather than disenfranchise them. Maia has a spontaneity which is very easy on the ear.
When she opened for Hello Saferide in Glasgow, you could have heard a pin drop. She spellbound the crowd into keeping their traps shut. How bloody often does that happen? She’s nice to “Gothenburg”, it’s no wonder that it’s likewise to her – that’s the deal she broke with the place in the song after all. With the right breaks, and a steady build, this lady is assured a long and chequered career. In these days, when songs are in the process of taking precedence over albums, the promise of her writing seems boundless. Something like “Say Goodbye” seems like a standard already. The piano and strings are used to create lush moods for her lyrics to wrap around. Like “urban” never happened. Did I hear you whisper, “if only”? So ditch the chocolate this Easter and give the gift of Maia. It's a sweet sound alright and it won't balloon you hips but it might balloon your hipness.
(If you check this out and get the bug like me then snag a copy of the single too because the additional song “A Year With You” isn’t on the album. )

Jesper Hedin appears on the album so that seems like a good segue into Autisterna. The group he and fellow HS alumni Per-Olof Stjärnered have going in the aforementioned Gothenburg. Imagine a jangly Bob Hund and you’ll get an inkling into the sound that’s bursting from their two song demo. In fact, you can listen at myspace, cannae say fairer than that.
Posted by Lindsay Hutton at 3:53 PM No comments:

Scientists shows in Australia and Europe, coming up to promote the new live album "Sedition", recorded at the Shepherd's Bush Empire last year. It's coming out on the ATP imprint.

Whilst some folks are still getting to grips with “The Tiredness”, I’ve been getting deeper into The Raunch Hands “Big Topp”. Seems to me that Chandler sounds more like the old Jimmy O than the guy himself. Some will argue that Mariconda is no Ron Asheton but that’s got sod all to do with it. As dirty ol’ rock’n’roll goes, few have delivered it stinkier than these guys over the years. I mean that in the most positive sense of the expression, like bad = good and all that drift. What this really is of course is a cut and shut of RH with The Stepbrothers.
It’s the US equivalent of what we call pub rock over here. Best enjoyed mayhap but not exclusively, having necked a few brews. “The Sophisticated Screw” kicks off the action as anything but. It’s a leering celebration of inebriated, jam-kicking, sweat running down the walls, soul-saving scuzz. And it’s all so good natured in the meanest ass sense of the word. It harks back to a danger that’s all but been lost. There’s a kinda CCR swing to it all too which can’t hurt. This Licorice Tree release is hopefully putting the wind up visitors to SXSW as I tap away from the label base in Austin. As so many reunions fall short, here’s one that nails past glories and surpasses ‘em here and there. Extra points for the vesh of Arthur Alexander’s “You Don’t Care”. What more can be asked I axes youse? If you’re at SxSW, then you can soak up the real thing at Beerland on March 18th, that’s TONIGHT!!
Posted by Lindsay Hutton at 2:20 PM 1 comment:
Newer Posts Older Posts Home
Subscribe to: Posts (Atom)