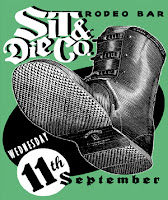 Back from summer vacation?  Susquehanna Industrial Tool & Die Co. is -- and back this week for its monthly residency at Rodeo Bar!

*WEDNESDAY, SEPTEMBER 11th / RODEO BAR /
375 Third Avenue (at the corner of 27th Street) in Manhattan /
We return to our second-Wednesday-of-the-month residency! /
Three back-to-school sets, from 9:00 sharp 'til midnight, with no cover.

And, speaking of residencies...

The ordering and sending of stuff by mail is getting crazy. There used to be a rule of thumb with a care package. If the post cost more than the contents then that was a cool thing. Nowadays there’s almost no danger of it being anything else.


I no longer send anything like the amount of packages I used to and that’s probably a good thing because if I did, then I’d likely be bankrupt. I don’t mind shelling out to bring joy to others but what I really do get into a kerfuffle about is when ordering from these fulfilment places that the post and handling amounts to more than the band or artist will get.
It doesn’t cost $20 to mail a record from the USA to Europe. It might be $12. Maybe, but even worse is the cost PER item. “That’s the way the system works”, I’ve been told but that’s simply robbery. Tempered with laziness. Post at cost with a wee bit on top would be fine but lining the halls of the postage service is not in my remit.
It’s pretty rough sending things out too. Since they started going by bulk rather than weight sometimes the costs can be eye-watering when you get to the “window”. It’s at least twice the price that it used to be and there’s been no improvement in the service. Indeed postal workers across the planet are being squeezed by the system. I don’t mind shelling for something that appears to work. However, when it takes 4 weeks for something to reach its destination when it’s alleged to be a 5 (working) day delivery then I get a little pissed off. With the advent of budget flights, it might be worth considering personal delivery.
The reason I bring this up is that I’ve been considering selling up the archive. Maybe via e-bag, maybe not. I tend to actively dislike the type of individual they’ve come to attract. And I don’t like getting stuck behind one of the entrepreneurs they’ve encouraged in the post office.
Posted by Lindsay Hutton at 6:29 PM No comments:
Newer Posts Older Posts Home
Subscribe to: Posts (Atom)