I've sort of had it with lists, charts and the like. Polls too. None of it really means shit other than what those who stand to gain want it to mean. I appreciate seeing people I like make it on to these things. Sure I do. It may make the saddoes that follow such things check something out that they wouldn't ordinarily. May...

Where these things really come into their own is when they're rigged for whatever reason. Anyway, this is a long way around to getting to something that has interested me for a while now. Only having 100 albums. Fuck having truckloads of stuff gathered on files from the internet or even a huge tactile music collection in the form of records, tapes and cds. If you wanted something new then something would have to go. I float this as a concept to justify letting go of stuff that is frankly choking me. I've mentioned this before but I don't think I've ever been closer to pulling the plug. Of course, it's unlikely that I'll have the bottle to go beyond that but one should never say never.

Afore I close, Paul Bridges has rightfully reminded me that it's 40 years since "Kick out The Jams" was recorded. Happy Zenta everybody!
Posted by Lindsay Hutton at 5:33 PM No comments: 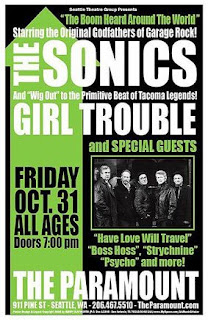 I was going to post the Roky Halloween stuff and lo and behold J already did it. That's service. A reminder then that Seattle will be the place to be as two generations of Tacoma cool come together to bring an almighty racket to the environs of the Paramount Theatre. I imagine that it's totally sold out by now but this is a top bill by any standards.
With regard to the Wooden Shjips this coming Sunday in Glasgow, I believe that doors will be 9pm and that the band is due onstage at Nice and Sleazy around 10.30/11pm. I've seldom known a show to run to schedule there but I imagine that's as close to a timetable as we're likely to get. I'll investigate ticket price, etc today and let you know if I find out anything. my guess would be a tenner.
No frost this morning, as far as I can tell...
Posted by Lindsay Hutton at 6:16 AM No comments:
Newer Posts Older Posts Home
Subscribe to: Posts (Atom)