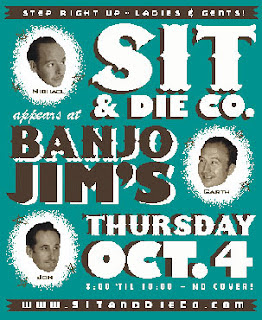 Fret not, we won't be breaking out the ol' five-stringed banjo -- just all the more reason to come join Susquehanna Industrial Tool & Die Co. this week for our first ever appearance at Banjo Jim's! Two big shows are in store, from 8:00 sharp until 10:00, and there's not only no cover charge, but no banjo, either. Sweet, yes?
THURSDAY, OCTOBER 4th / BANJO JIM'S / 700 East 9th Street (on the corner of 9th Street and Avenue C) in Manhattan's "East Village", NYC / Two sets, from 8:00 sharp until 10:00 / Followed at 10:00 by the expectedly well-cooked Swamp Cabbage /
No cover charge!
Remaining banjo-free, as always,
Michael
Susquehanna Industrial Tool & Die Co.
"Ballads, Boogies & Blues"
Posted by Lindsay Hutton at 7:01 PM No comments:
As October seems destined hurtle by in much the same way as September did, I've somewhat come to the conclusion that I have no control over the order and priority of the day to day. Seems like I used to have all that nailed but no more, also I'd like to spend less time in front of a computer screen. Way less time, both here and at work. Adding to everyone's info overload is something that seems somewhat surplus to requirements. The constant bombardment gets to be very tiring and can turn something that's supposed to be fun into a chore. Sound familiar?

Time to take some kind of stock then, in terms of what's up with what’s going down. My liner notes for the upcoming Munster Nomads and Supersuckers dvds are completed and filed with the relevant authorities in Madrid. Couple or three other bits and pieces to take care of but after that it's a straight run into The Boonaraaas London debut on November 2nd at Dirty Water.

Reserve your tickets by clicking on the logo to your immediate left. Of course, some of you will be digging The Sonics that self same night at Cavestomp in Brooklyn.


As of tomorrow, another mail strike is set to swing into action and it'll last until next Thursday, give or take. I guess that'll hold up delivery of my copy of Sweat for another while? It’s all set to escalate and I imagine that it's gonna get ugly in the run up to the big money spinner and the fact that boths sides won't want to capitulate. Meanwhile what about the stuff we've ordered!?

As the news of the Pistols re-recording “Anarchy” for some computer game (dearie me - not terribly indicative antichrist behaviour is it?) broke, PUNK 365 arrived to remind us of times long past. This is a veritable doorstop of a volume that has plenty to distract you from what you ought to be doing. Get yourself a Home Blitz cd to accompany this malingering and odds are you could put off what you meant to do for, och, days at least. P365 is a total bargain from Amazon so treat your good or bad self. 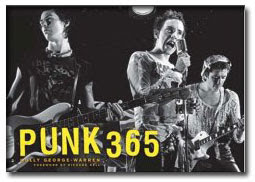 The Ramones It’s Alive double dvd is out too. Order both to score super saver delivery!

As I attempt to get my head around the "bucky gift pack" concept, further rumours of a deluxe version with a burberry scarf type ribbon and a cap are as yet unsubstantiated.

OK, gonna put some music on and I'm going to veg out. Order and priority have been AWOL for long and weary, another day or so in the wilderness won't hurt. Have a fine evening, whatever you end up getting up to.
Posted by Lindsay Hutton at 6:31 PM No comments:
I've always believed that tha Scandanavian quality of life is better and this is further borne out by the information below.

What better way to forget this blah days to Christmas malarky than to be looking forward to a real Rok around the Christmas tree. (Thanks to Mr Hagred for the info)