Gimme Söder!
My first gallivant of 2013 took place last week in the fine, fine city of Stockholm. The first time since 2009 thanks to a committee of dear friends that “made me an offer I couldn’t refuse”. It was a rip-roaring reprise that reminded me exactly why I feel I could actually live there. I heard tell of one or two things that seem to be eroding the “system” but it has a long way to fall afore it hits the heady lows of this country. That’s the UK, god knows what’ll happen when the Brigadoon Theme Park opens. 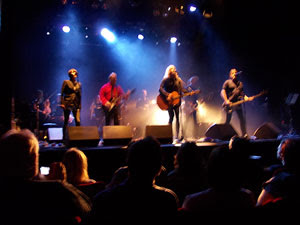 So in terms of social it was a ball. With excellent company straight from the airport arrival gates right the way through to the station platform for the train out.
Hanging out with dear (old as in long time not ancient) friends was largely the order of the day. Eating, a few sherbets, a Mr Ulf record-playing session and some more sherbets was pretty much the short of it. I even did a "tourist thing" with Qina by going to City Hall and had a fine pre-bonfire mutant meatball dinner.
The Nomads show at Södra Teatern with Staffan Hellstrand was pretty amazing. They made an album together called “Pascha Jim’s Dagbook” back in 1996 and this was a live revisitation in a stunning setting. I’d never heard it but this was an ideal introduction. The Stockholm Strings, Fredrick Blank and Idde Schultz completed the line up. It was very Swedish but it really didn’t matter that I couldn’t understand the lyrics. Like Säkert!, the music provides a heart and soul that renders mere words pointless. Very anthemic and almost too big for the room.
I posted a clip the other day so if you scroll down to below this and you can find that and wish you’d been there. Hopefully they'll do it all again in spite of the lukewarm turnout. The people who were there left the theatre buzzing.
The night before I came home, we saw Impo and the Tents with Crusaders of Love in The Cavern in the fine Southside Pub venue. I’d liked the Impo things that Ferdi posted on facebook and while the noise they make is agreeable, the guitar players hat and wife beater (that’s what they call a simmet in rock circles) combo wasn’t happening. They need a stylist.
Them Crusaders however, from Lille in France, flew straight out of the traps. The first 5 songs were as good a debut as I’ve seen in recent memory. Imagine a glammed up Real Kids, these kids looked the part before they even took to the stage. If they swing past anywhere near you then I heartily recommend you dig in. The show was promoted by Thomas Savage’s “Push My Buttons” outfit. A man that’s been doing it for the kids for a while now. Walking to the subway, we ran into the great Jens Lagergren so that was a very agreeable way to top of the evening. I tottered up and over past Södra Teatern and back to base camp. It had been an intensive few days but cleansing to some degree. And very humbling.
When I’m whining about the day to day bullshit I should perhaps count to 5 and contemplate situations like this. Of course, I’ll still whine but I appreciate it way more than I could ever explain.
And like the troopers they are, my tour management met up for the farewell at Central Station. Possibly to make sure I got on the Arlanda Express and wasn’t still wandering around town, ha ha.
My deep thanks to everyone that pitched in on this project. It means a helluva lot and I hope to repay this amazing gesture down the road apiece.
And to finish a bit of video that the Stockholm Tourist Board should employ and a cracking wee song in the bargain.