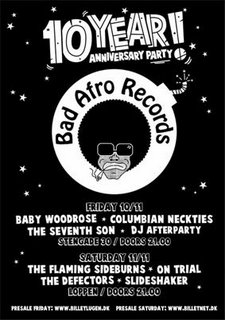 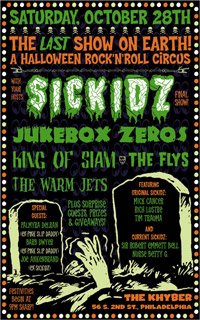 THE SICKIDZ PRESENT: THE LAST SHOW ON EARTH

"As the bearded Beatle bard George once bemoaned, all things must pass....

Thus, on Saturday, October 28, 2006 at The Khyber, 9:00 PM sharp, with ghouls and fools lurking in the belfry, the quasi-legendary punk rock ban, SICKIDZ, will present The Last Show on Earth: A Halloween Rock 'N' Roll Circus, and desecrate a stage for what could be the last time.

Conspiring with the group for this final Rehearsal for Retirement will be the garage rock heroes The Jukebox Zeroes, the wonderfully eccentric King of Siam, the strange and sensual femme fatales who are The Flys, a resuscitated version of the immortal Warm Jets, a special acoustic performance by national treasure Palmyra Delran, plus appearances by Dingal and McGuffrey, Remi Shinguard, Slash Shakir, Yokohohohno, Dr. D's Tijuana Donkey Show, as well as prizes, surprizes, giveaways, and contests.

The Sickidz, of course, got a reputation. The original Band That Can't Play, they are a local institution and embarrassment, accused of inciting mayhem, apocalypse and redemption. They've been around forever, played any/everywhere that would have 'em, put out music produced by The Cramps, opened for Iggy, gave Ben Vaughn his only one shot at fame and fortune, endured deathdarkness, became internationally famous, split up, spit up, reunited and have finally determined that enough is indeed enough.

So, it's goodbye baby and amen. Arrive early, leave late. The Sickidz wish to bite you and bid adieu.

Got anything better to do?"