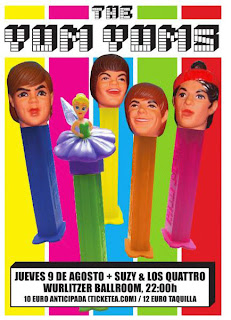 I forgot someone’s name the other day and it took an awful long time to register. The grey matter ain’t firing up to the pint of being scrambled and instances like this only serve to vex me. Can’t really figure much of anything other than a stream of unconsciousness. Several basic functions seem to have gone out the window altogether, it must be an age thing.

I’m working with a premise – not exactly based on scientific fact – that I might have 20 years. Give or take, and that’s erring on the kind side. Going through a classic David Byrne “how did I get here?” period and fairly certain that I’m not gonna haul it out to Kitty Wells territory that’s for damn sure. It’s not grim per se, just facing facts.

Time to catch up on stuff that’s going on and I’ll also take the opporchancity to flag up a couple of things that are imminent.

Hope you can get along to the Glasgow screening of The Wrecking Crew at Stereo on Friday (20th). Denny Tedesco will be in attendance and he’ll be doing a Q+A with wir ain Sir Francis Macdonald. Gerry Love will be spinning records across the evening also. Should be a hoot, it’s a fundraising exercise to get the film out properly. Future generations will be in your debt. This is one of the greatest music documentaries of all time. No "talking heads", just the folks who were there that brought the shimmer to all those classic pop songs that have become standards during our lifetime.

It’s the last week of Eric and Amy’s Kickstarter campaign and although they hit their “target”, they need all the green you can muster to keep their wagon rolling. Please help them out because they make having to put up with the day to day bullshit of existence totally worthwhile. This means that they can plan the campaign and administer it properly. Keep throwing money at them right up to the last minute and get ready because they’ll be playing somewhere near you in the coming weeks and months, bringing the “Working Museum” directly to you.

You may recall my recent posting of a video for a belting little Stiff-era ditty entitled “Right Hot Dog, Wrong Bun”? As you’d imagine, the person responsible – one Travis Ramin – terrorises the twin cities and further afield on this here interweb with his cohort Danny using a vehicle with the moniker of Jazzed Up and Bonkers. No, those aren’t the pair’s urban names. The latest edition has cool rambling chat with Kim Shattuck of The Muffs and a generous helping of crazy records to boot.

Dave Alvin and The Guilty Ones are hitting Ireland right about now. Would have loved to hop over but ‘tis not to be but Madrid for a double header with The Yum Yums and Suzy & Los Quattro is scheduled for August 9th at the mighty Wurlitzer Ballroom.

Some folks have been asking how to contact us since I removed the link. If you make a comment below any post then I'll respond. The reason for removing it was because I was inundated with guff mp3s and idiots that looking to parade on the circus that takes our moniker in vain. It’s actually quite alarming to consider that so many no-talents would consider that they might compete with anything but that’s human nature for you. Then there’s the bot traffic...

I ruthlessly delete anything that makes it through the defences but even that can take time. Something I really don't feel like I have on my side.
Posted by Lindsay Hutton at 7:19 PM 1 comment:
Newer Posts Older Posts Home
Subscribe to: Posts (Atom)