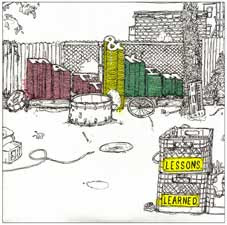 Sealing their transition from lofts to smaller clubs to seasoned entertainer status, Matt and Kim were the scrum-diddley-umptious filling between two other acts last night in the west end of Glasgow. They scored the Best Video award from MTV before flying out for a lengthy European tour that runs until December 20th. The “ceremony” has yet to be aired but it all blasts off with this particular dynamo of a duo. They’re probably thinking, what the hell are we doing here? It’s a pretty selfless sacrifice to go to another planet when the popularity back home stateside is headed, deservedly, for the stratosphere.

If you’re sharp you can catch them in Manchester tonight and then London. After that they’re off to Madrid, Barcelona and everywhere else. Go to their myspace, it's all there.

When this side of the big puddle finally catches on that rabid fandom will ensue. That “Lessons Learned” didn’t become ubiquitous over the summer is an indictment of how the rickety machinery works here. That being a continual failure to recognise the difference between passion and going through the motions. Or if you’d rather, a rubber ear in terms of being able to spot a cracking tune. This isn’t about paying for visibility or perceived popularity. These kids did it their way and succeeded. They’re not peddling something that’s sanctioned by those rags that aren’t even good for the bottom of your budgies cage. The genuine positivity that they exude is infectious. Plenty of the audience last night knew the songs and by the time that “The Final Countdown” segued into “Daylight”, the patented Glasgow appreciation was in full flight.

I think that M&K felt the love and hope that they’ll reciprocate by coming back soon. Bypass England by all means but Scotland needs you.
Posted by Lindsay Hutton at 6:30 PM No comments:
Newer Posts Older Posts Home
Subscribe to: Posts (Atom)