Posted by Lindsay Hutton at 6:07 PM No comments:


Posted by Lindsay Hutton at 7:03 PM No comments:

MY FAVOURITE NEW BAND OF 2018 INTERVIEWED OUTSIDE OVNI in MADRID


Posted by Lindsay Hutton at 6:35 PM No comments:


Sorry to hear about this. Patrick was a force of nature as was his New Rose imprint. Last contact I had with him was when I was working on the Cubist Blues liner note thing.

Here's something from one of the fine records he brought to the world.

Posted by Lindsay Hutton at 7:44 AM No comments:


Posted by Lindsay Hutton at 6:39 PM No comments:

FUNTASTIC HITS ITS TEENAGE YEARS - THIRTEEN YEARS OF ROLLING IN THE THUNDER! 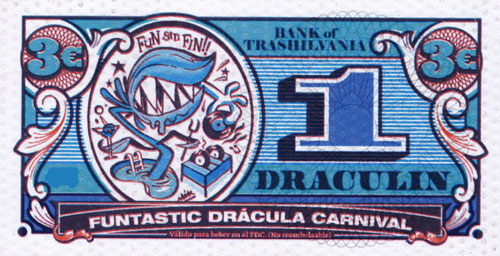 My report is a wee bit late this year for a number of reasons but here goes...

The celebrations nudged into November this year and coincided with the resort’s end of season surge. The sight of beered-up Brits is a lot scarier than anything the most fevered Funtasticos could dream up. Heading into town, the bus was three quarters full of these fuckwits but in annual fashion I made a new friend that made the journey bearable. I’d noticed that Clara was wearing a Dead Moon badge and discovered this was her first time. We had a beer and who should daunder past but Rafa and Patri so it turned into a wee session. The hotel was pretty good, Flamingo Beach Resort. It was named after a Flamin Groovies album and alluded to John Waters and I managed to steer clear of the ‘full-boarders’ for the duration of my stay.

The Sinciders kicked things off and then came The Cyanide Pills. This meant I was able to hang out with the man who made Sesentafest happen, Jonathan (BB Quattro) Vidal. Peter Zaremba & Las Munjitas del Fuzz set the bar bloody high... drawing on a set from the dawn of The Fleshtones, I felt the spirits of both Marty Thau and Alan Vega in the room. Red Star records was well represented that weekend as the undoubted main attraction and I became friends four decades ago when she worked for that very imprint. At one point – during 'BYOB' – it seemed as though the Z-man channelled Vega. I was right up front for that whole stramash and it was a flat out hoot complete with the one and the only Jimmy Garcia.

I was too busy blethering to watch much of The Red Aunts or The Sinister Six but they went down great and I really like the Red Aunt bass players cook book. The new venue wasn’t altogether easy to navigate in order to find people. Breaking in a new place and increasing the number of bodies posed a few challenges. Of course we loved the KU-FO but there were practical reasons for shifting and largely the event really rose to the occasion. The stage crew kept things on schedule and Mike – the guy who headed that aspect up – really delivered. The Penelope is an iconic construction further up the road. The logo of the girl in the hat was ubiquitous in the 70s. It’s a BIG place with so many nooks and crannies so not real easy to navigate. Rome wasn’t built in a day though, it takes time for any new environment to be broken in. Was peeved that Motorgirl were on by the time I got there but what I saw was just the ticket. Look forward to seeing a whole show sometime in my future.


Miriam and Nobody’s Babies played what was perhaps the most intense show I ever attended in my life. I’ve known this gal for 40 years and she and Billy are a large part of the reason I stuck with this stuff. The Norton religion is non-denomin-inter-national. Blessed are the faithful and many present were in tears during the performance that seemed to go by in a blip. I’m feeling a little choked here writing about it. The band was outstanding and I was fanboy-thrilled to finally meet Sam Elwitt, the guy who really made it all possible alongside Billy's A+R brilliance. 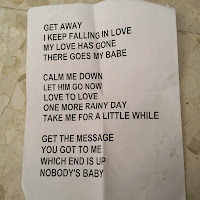 Mir’s Joey Ramone via Lulu vocals bathed the audience in light which would be hands down the best set of the weekend. Check the setlist. To call that 45 minutes emotional would be a heavy understatement. After that, a stiff G + T was in order. I don’t think it even touched the sides. This weekend saw the lassie claim the crown of ‘Everybody’s Baby’ with good reason. The amount of love in that room when she played was palpable. She announced that this was her last show but I never heard it. Maybe I just shut it out because I sure hope it isn't.

Radio Birdman delivered a full on onslaught and to hear 1000 people yelling ‘Yeah Hup’ is pretty reassuring in these fucked up times. I watched most of the set from the DJ station to the left of the stage and the sound was perfectly crisp and loud there.

There was more chin-wagging to be done at that point and I didn’t catch anyone else. Got to meet Travis Ramin and also Alana Motorgirl, that was a hoot. The social aspect of this gathering is unsurpassed. The Wild Weekend Go-Go  Lounge was a popular attraction and at some points was so-packed that it was impossible to squeeze in. I experienced great DJ sets by Ben Olins, Count Zaremba and Matt Clarke in there and it seems to augur well for the reactivating Wild Weekend out in Mallorca in April 2019. Right after Br*xit. Much as I would like to have caught Nancy – it weren’t to be but anything that can make Francisco entuse like he has since he saw them must be doing something right.

I exited around 5am but was back outside Penelope a couple of hours later to snap this picture with my new group, The Mighty Mai-Tones. Maybe we’ll play next year. I’m their ‘Bez’ and that’s just fine with me.

Had a schlep around town and various hostelries in the run up to Saturday’s proceedings, I was determined to be at Penelope for The Oddballs and I’m glad I was. Just as Crackhouse blew me away last year, these guys did so likewise. Just really good with a set that maintained the brevity I like. Imagine Lord Rochester as a ‘big band’, replete with washboard player.

Much as I would like to have watched more than one Gears song, I had to go and rest up a wee bit. This night I didn’t watch the bands so much and I just couldn’t get a good vantage point to watch Derv Gordon properly. Jeroen was front and centre and dug it so much that he went again in Amsterdam.
He tells me that Trevor White played 'Crazy Kids' with So What at the London show. It was sure great to hear that very song get a blast in Benidorm. The DJs there are selected as well as the acts are.

The music played into the night and as the sun was coming up, Snr Varo blitzed the remainers with hit after hit. The one woman confetti-machine that is Paloma covered everyone in the stuff and we’ll be finding fragments for months to come. So that was the 13th edition done and dusted. I think that there’ll be a moratorium before mulling over how to make this venue work like KU did. It’s not so live band friendly really because it was purpose built as a discotheque. As ‘Keep A- Knockin’  blasted the crowd afore it spilled out into the sunlight, we were reminded of the healing powers of rock n’ roll. I spotted one girl across the dancefloor capturing the titles via Shazam. I like to think she wanted to recreate that final volley when she went home. Them wacky youngsters...

I’m proud to have scored a new record in getting back to the hotel at 9.30am. My previous personal best was 8am. How Paloma and Varo keep pulling off the greatest rock n’ roll party of the year time after time is evidently a military secret. It must be getting difficult to assemble a bill like this but they just keep them coming. And I can’t even begin to imagine the stress levels involved.

There were obviously some challenging conditions with this new spot but these were overcome and then some. I hear the after party on Sunday was a blast too but there was a wee conflict of a sesenta y uno gathering down on the boardwalk. It’s not really a boardwalk but its right next to the beach. There had been Sesentafesters there all week but the Madrid locals mostly had to return to the city to start work not exactly bright but early on the Monday morning.

Hero of the event was my old mucker Matthias from Berlin who drove Miriam and Matt to Barajas to catch a plane after they missed the original flight through no fault of their own. Staying for a couple extra days assisted the decompression for sure. I had about 8 hours sleep in 72 but some of my crew had less (Monica - I'm talking to you!). I salute those hardy souls and look forward to rolling in the Funtastic thunder another time in 2019.

Very happy to have images here by Captain Jeroen Vedder, the man, without whose assistance, NBT may never have become a blog.
Posted by Lindsay Hutton at 11:01 AM No comments: