Posted by Lindsay Hutton at 6:03 PM No comments: 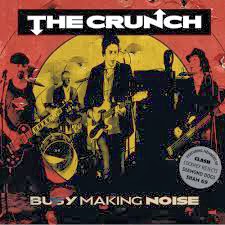 The Crunch album “Busy Making Noise” finally made it through my letterbox.  A “supergroup” of sorts that ought to strike joy into the hearts of those that reckon “Give ‘em Enough Rope” is the best Clash album and that “Only Lovers Left Alive” was the best record Dave Tregunna ever made. Add a wee dash of Mott and Lizzy and we’re all set to revisit the heady heights of 1978 when anthems were a lot less complicated. Clocking in at 40 minutes dead, this is a rip-roaring adventure from start to finish and the icing on a very tasty cake is Idde Schultz weighing in on backing vocals. I’ve long considered her the Scandic Ellen Foley and the “duet”, “A Little Bit Of Grace” pretty much vindicates that notion. If there was ever such a thing as a pub-punk rockin’ take on Roxette then this is the blueprint.
The band is Sulo Karlsson, Terry Chimes, Mickey Geggus and the aforementioned Dave T and absolutely yes, they’re all old enough to know better but thank fuck they didn’t let that get in the way. You can just tell they had a ball making it to the extent that it’s almost like an “original cast” recording of some kind of crazy musical celebrating an era that’s unlikely to be better represented. Authenticity is one thing but it’s the spirit that makes this bugger fly. Maybe I’m just a sad sack clinging on to the past but I swear, as clichéd as some of this might seem – it made me misty-eyed. If they’re half as good live = and I suspect they'll be better - then I can’t wait to see them, preferably in Spain where the kids appreciate this type of ruckus. As it is, they’re in London this impending December and I’m otherwise engaged that weekend or my bahookie would be on the train for sure.