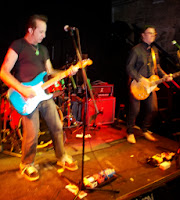 The Del Lords long anticipated return to this side of the pond is now underway and the inaugural show in Newcastle on Saturday night was a stone gas. As the band exploded into a muscular lollup through “Jumpin’ In The Night” it was clear that the room may not be big enough to contain such expurgated rock’n’roll thrills.
Mixing back catalogue with material from the recent "Elvis Club" release, it was all over way too quickly. How many bands do you wish would play longer? Not bloody many.
So here we are hanging on the intersection of The Bobby Fuller Four and Crazy Horse. Blazing guitars, a bigger than big beat and a bass undertow to bolster the whole glorious shebang. Oh yeah, and songs. Remember those? Scott Kempner was/is the heart and soul of The Dictators. Never forget that. Without him, The Dictators are Manitoba’s Wild Kingdom. So despite the sadness of what’s going on with all that, The Del Lords have a new lease on life. 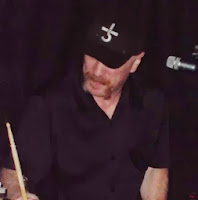 Cultural differences such as Sharpies and marker pens notwithstanding, Newcastle has always been a rockin’ town and this was rockin’ time. (All hail Tyneside’s 16 Forever). They recognise greatness down there and by the time Roscoe delivered the hymn that is “Judas Kiss” over a Creedence-esque rumble then the game was in the proverbial bag.
The Cluny 2’s bijou theatre vibe was perhaps a little polite for the occasion on Saturday. By the time they get to Spain then the dance floor ante action is likely to be raised substantially. “I Play The Drums” was pretty much perfect and it seemed as though the roof might cave in such was the mightiness. Frank Funaro is one hell of a pounder and Steve Almaas does a fine job now that Manny is gone. His days in Beat Rodeo are likewise from the days when Americana was called Roots Rock.

If they’re anywhere near where you are then you have to go and get some of this most righteous, practically religious experience. Let’s leave the best definition of what we witnessed to a Del Lords fan that just checked out...
"Nothing beats two guitars, bass & drums." - Lou Reed


All of the show dates are here, Spain, London, Germany and Sweden... take a look and cut along!