It was another of those jump starts. A sleepless night followed by a sluggish reaction to having too much to do in too little time. Getting to be something of a habit and it really throws me off. A blast of the Adiam album (out in Scandanavia today!) brought me round on the way to work. The damage with regard to what the car needed wasn't quite as bad as anticipated but still leaves a dent in the old wallet that I could have done without. So anyway, I have some reading and stuff to catch up with. I'm also trying to get a beat on "City Rock"...

A few things to keep you amused then... 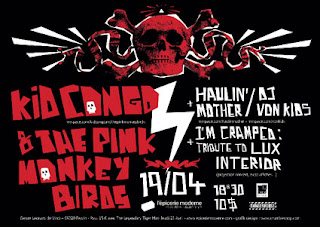 Tom Phobic wishes it to be known... Hi kids, Well the credit crunch has fecked us all rightly, I'm potless, all my shares are worth nothing and the yacht and apartments in New York, Bermuda and Deptford have been repossessed. My team lost the Carling Cup and I'm getting balder as well. Already in 2009 Big Ron and Lux have been snatched away from us, and thats sad brothers and sisters it really is. Still, as Phil Spector once said "Look after Rock n Roll and it will look after you" and thats what we're gonna do - just for all you out there in myspace land. We've a gig to tell you about and without further horsesh*t here tis' - Saturday 21st March at THE MARLBOROUGH - 67 SEDGMOOR PLACE, CAMBERWELL, SE5 7SE with the very wonderful ZOMBIE MET GIRL.

And that's yer lot for now. There's more but it's gonna take some compiling. I'm going to try and knock the hour before I go to work thing on the napper also.

One last gem to leave you with here.