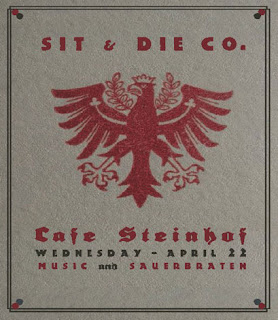 "More sauerbraten, please!" Susquehanna Industrial Tool & Die Co. returns to the charming Cafe Steinhof in Park Slope this week for more of that good ol' Viennese home cooking and tasty German brews: WEDNESDAY, APRIL 22nd / CAFE STEINHOF / 422 Seventh Avenue (at 14th Street) in Park Slope, Brooklyn / Two teutonic shows, from 10:30 sharp until 12:30 / No cover! / Dining optional, but with a full menu until 11pm!
Plus, next week, on a more tropical note...
THURSDAY, APRIL 30th / OTTO'S SHRUNKEN HEAD TIKI BAR & LOUNGE / 538 East 14th Street (just west of Avenue B) in Manhattan / Two portly shows, from 8:00 sharp until 10:00 / No cover charge!
Auf Wiedersehen! Michael
Susquehanna Industrial Tool & Die Co.
"Ballads, Boogies & Blues"
Posted by Lindsay Hutton at 9:03 PM 1 comment:
RIP - JG Ballard
Posted by Lindsay Hutton at 7:33 PM 3 comments:
At the end of the last episode, you'll remember that your reporter was not in the frame of mind to go to the big rock show. I've seen The Supersuckers a bunch of times, as it happens on occasions I didn't remember until my memory was jogged. They're a great band. Not as Eddie kept telling us, "the greatest rock'n'roll band in the world" but capable of opening a can of whupass when called upon. They've been hauling this particular circus around for two decades now and I'm wondering if Mr Spaghetti is sponsored by Gilleys? How many of those t-shirts does he have exactly? Anyway, you get what they give and the sound last night was horrendous. Worst I ever heard in a place where it's generally good. I have it on legit authority that it was the same in Malmo but that's another story.

Had never seen Nashville Pussy but was always underwhelmed with the records. Nine Pound Hammer on the other hand is something I'll never tire of, because they have songs. "This one is about going down" said Blaine C. "Not again" was what crossed my mind. It's all so 1974, but not in a good way. True, you wouldn't fancy the bass player in Black Oak Arkansas but they had hot and nasty down pat. (Of course, I'm talking about myself here, maybe YOU would and that's your beeswax.) I really wanted to be convinced otherwise but it fell a bit flat. A cover of Slade's "Why Why Why" raised the game slightly but by that time, it was too late. NP could be great with a little calibration but I doubt that's ever gonna happen

The addition of another opener was a mistake too because that was beyond awful. It's time the "rock show" as an art form - cut to the chase. Stop fannying about and give us your best 35 minutes. Leave us wanting more for fucks sake, not wishing it was over. Make us believe. It's like people will whoop and holler for anything at this point if it makes them feel like they've had their moneys worth. I saw a guy wearing a leather jacket with Forbidden Dimension on the back. That was pretty cool and there was a girl with some very impressive tattoo work standing just to the left of me at one point. Those shouldn't have been the highlights but they were.

If only Mr McLean's fb message had come in just a few minutes earlier yesterday evening...

Mr Duff informed me that Roky is playing in London at the HMV Forum (formerly T&C and most recently, Kentish Town Forum) on August 20th and also that the Shjips are at The Borderline the night before. Anybody know who RKE’s band will be?
Posted by Lindsay Hutton at 5:30 PM No comments:
Newer Posts Older Posts Home
Subscribe to: Posts (Atom)