Does anyone remember Gruppo Sportivo? John Peel played their first LP, they appeared on TOGWT and Sire picked 'em up for US release...
Posted by Jeroen Vedder at 11:52 PM 2 comments:
Phil Spector - The verdict...
Posted by Jeroen Vedder at 11:47 PM No comments:
Never made it to the pictures (again). So this is like being on "twitter", only substituting an "a" for the "i". Aye. So let's see, a news update before I go watch a dvd. The extrication of the weeds in the drive is coming along fine. Oh, wait - you don't care about that, how about this then? (That sounds justa tad too Jimmy Saville but let's just run with it.)

Mr Duff has highlighted that Roky Erickson will play The Green Man Festival in August. Enterprising promoters might want to check out the ins and outs of bringing the man north? With The Explosives or preferably with The Nomads but either way, it's time that justice was done. He could surely sell out the big ABC?

Russell hepped me from NYC that the Joey Ramone Birthday Bash details for May are now available on the revamped Joe website as well as details of how to score tickets. There's a rumour that Eddie Vedder will appear but far more exciting is the news that Kitty Kowalski will join Bebe Buell onstage that evening. 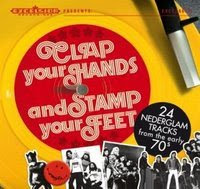 Jos sent the following news on the imminent release of this. Looks like it would be just up our particular alley...

"Coming out next week, not on A Fistful of Records, but on other Utrecht, NL label - Excelsior. A cd comp of early 70s Nederglam !

Fistful Jos and Brit accomplice Robin Wills worked on this thing for some years now, having done all research, compilation and sleevenotes. The set is entitled "Clap Your Hands And Stamp Your Feet" after Dutch glam's biggest hit at the time by Bonnie St Claire & Unit Gloria. Other songs include some totally unknown Glam Rock stompers & crunchers by acts like Booby Trap, The Heavy Dwarfs, Dump, Zingara, Pantherman and Plastic Feet. Among somewhat better known acts like Lemming, Catapult, Left Side and Long Tall Ernie And The Shakers you will discover a multitude of Glam era obscurities that will blow your socks off and open your mind to some great sounds and beats ! With The Netherlands being the main country in continental Europe to boast a Glam scene, a collection of this stuff is way overdue. 24 songs by 23 acts with a 52 page full colour booklet crammed with cool pics, plus the incredible stories behind all bands and songs. Also included are reprints of all original sleeves, whether Dutch or foreign.

The cd launch will take place at the Utrecht cd and record fair, next saturday April 18th, from about 1 till 3 o’clock. There’ll be dj’s, original Nederglam videos, an exhibition of Nederglam memorablia and record sleeves and a Smyle reunion gig! Many ex-glamstars will be present, like the Catapult guys, the one and only Pantherman, of course Smyle, Lemming singer Wally, some Left Side guys, producer Peter Koelewijn, mr. Pink Elephant Willem van Kooten, the Booby Trap singer and all members of Bonnie st Claire & Unit Gloria, most probably including queen Bonnie herself !!!!!!!!!!!!!

“Clap Your Hands And Stamp Your Feet” will be available in all good Benelux record shops. It can also be ordered direct from Excelsior .

And finally, I found two copies of NBT 26 replete with Monomen 45 and would be happy to send a copy to whoever would like to provide a good home.
Posted by Lindsay Hutton at 2:51 PM No comments: 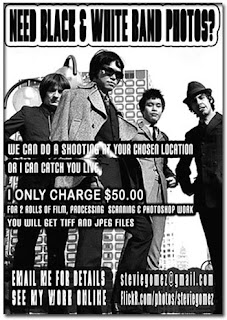 If you're in and around Boston, that's the city in Mass. not the Tufnel park hostelry, then maybe you need the services of my ol' pal, Ms Stevie Gomez. Primo photographer and long time keeper of the faith. Click on the image for more info.

Looks like another good day out so that trip to the cinema in Auld Reekie is probably on. Of course, there's still plenty of time to talk myself out of it but its looking like "game on" at the minute. The mode of transport is in dispute but that is likely to be settled in due course.
"Scotland is staring into the abyss of social collapse" it just said on the wireless. Plus they're punting the notion that everything going down the pan is herding the masses toward religion. Too late folks, your cards are marked. Might as well go down with a crate of buckie and a 3 cd set of happy hardcore. Or maybe not. Myself? I'll stick with "Let The Right One In" at The Cameo - 12.45 for starters.
Posted by Lindsay Hutton at 8:18 AM 2 comments:
Newer Posts Older Posts Home
Subscribe to: Posts (Atom)