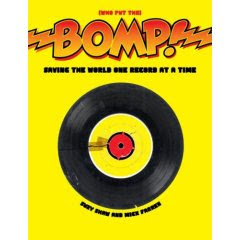 BOMP; THE BOOK!
Now here's something to look forward to...
Posted by Jeroen Vedder at 9:52 PM 2 comments:
It was a long day yesterday, conned-puter course all day then up to the Filmhouse to try and get a ticket for "Castells". Was too late though and ended up seeing "The Simpsons Movie" instead. It was OK, three times the length of a TV episode with about the same amount of really good stuff as you'd get in one. There were maybe 10 people in the audience. Anyways, following that I saw The Nukes at Henry's Cellar Bar. It's a pretty good venue but being below a Chinese Restaurant it honks a wee bit. And I'm not big on Chinese food. Anyway with surf-tinged blasters like "Last Tango In Pilrig", I think you folks would like them. They're doing an Instore at Elvis Shakespeare on Saturday afternoon in Edinburgh (2pm) to promote "Picnic In Peking". Anyway it was all capped off by a visit to "Born To Be Wide" where the great Captain Cruickshank was doing his DJ bit. And then it was off for the last train, jst prior to turning intae the proverbial pumpkin.

And on the subject of Cowabunga type antics, on the west coast - The Beat Poets will be shooting the curl at Blackfriars in Glasgow this coming Sunday, 26th August. They'll also be at the Merchant City Fest but I'll remind you 'bout that closer to the time.

More film festival today, back later tonight or first thing tomorrow. Unless I get a better offer, which is somewhat unlikely...
Posted by Lindsay Hutton at 8:38 AM No comments:
Newer Posts Older Posts Home
Subscribe to: Posts (Atom)