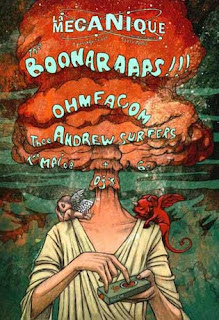 Paris is the place to be tomorrow (Thursday 1st May)...
The Boonaraaas and Margaret Doll Rod in town on the same day!
Posted by Lindsay Hutton at 9:08 PM 1 comment:
So today has worked out. The meter is in situ so let the fleecing begin. My Ox column is done and I’m sitting here listening to Cake. It just gets better and better and it has made getting my copy of Ellen Foley’s “Nightout” down for a birl something of a priority. I’ve got an urge to spin some T. Rex now too. Ah, the power of PROPER radio!

With regards the fuel crisis, I imagine that's the excitement just about over. We'll see how the Union Vs Ineos dispute goes from here. Not only does the company sound like something from Dr Who, the general mantra of their representatives isn't terribly far removed either. Let's hope that something can be figured out so we don’t have to suffer the pontificating. Meanwhile, the rice "crisis" will perhaps be next to conjure up panic buying. I'm all out of the stuff and who knows when it'll be possible to get some more. Jings.

I wonder if anyone has come up with electronic ration cards yet? Seems like those could be in demand across a number of sectors very soon. The term "emerging markets" seems to be a new term for greedy bastards.

I just read something about Madonna being Number 1 for the second week. I'm not purposely avoiding her music but I haven't heard it. I've read that she has a new record out but none of the old channels which would have flogged it to death in the run-up to release exist any longer. Is that a good thing? Well, it kinda cuts two ways. There's too much information to process these days and the ubiquity once afforded those with a high profile is spread more thinly over far, far more outlets.

It's not that I'm not interested. More that I'm not THAT interested. I like to keep my finger on the pulse if possible but there aren't enough hours in the day anymore. Maybe it's great. Maybe it would make such an impression that I'd get it as a ringtone and everything. But wait, I'd have to get a phone first for that to work.

Anyways, what I'm getting at is that it's very easy to avoid things. You don't even have to be actively avoiding it, you just make the call based on your attention span. If it ain’t on Cake – well chances are it doesn’t exist.
Posted by Lindsay Hutton at 6:57 PM No comments:
Ok, couple of things to keep you occupied as I gather my, er, thoughts... Supposed to be getting a new gas meter fitted today and have had to burn a day's holiday for the privilege. Not happy but shit - inevitably - happens.

Half the opus that Suzy & Los Quattro have christened "Stick With It" is available for your listening pleasure on their myspace now. It'll be out in May on Wild Punk (cd) and Screaming Apple (vinyl). Order your copies now direct or from Soundflat!

I Are Droid includes the great Konie and the ubiquitous Jens Lagergren. The sound of their first Razzia "single" illustrates what happens if some Clash genes were to invade a test tube with some John Foxx era Ultravox bone samples! Sweeping pop prog from Sweden.
Posted by Lindsay Hutton at 8:25 AM No comments:
Awraverybest, Congratulations, Gaun Yersel's to my friends - Amy Rigby and (Wreckless) Eric Goulden who are getting married today out yonder in France.

You can help them make an extended celebration when they come to your 'hood to introduce you to their recording debut as a couple also. They're great kids as well as being great - kids! Lang may their collective lum reek!
Posted by Lindsay Hutton at 7:08 AM No comments:
Newer Posts Older Posts Home
Subscribe to: Posts (Atom)