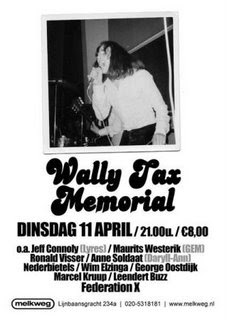 "..4 limbs! 3 chords! 2drums! 1busted up guitar!...yes misters 'n' sisters the buzz on the streets of old europa is true.Randy "CAPTAIN DYNAMITE" Hornocker of the world famous stage and recording outfit THE COYOTEMEN is headin' out yonder on his lonesome ownsome.The lucky folks of the european union will be the first to taste the sight and smell of this masked master of moron-o-phonic muck, when THE CAPTAIN treads the boards with his old sparrin' partners LOS CHICOS, in April, in the year of our lord 2006.takin' THE COYOTEMEN black 'n' blue print of masked lucha libre garage rock action to it's barest form CAPTAIN DYNAMITE throws in some illegal moves in the form of country/rockabilly and full on punk-ola'n' y'know it goes without sayin' the big.D. will be sportin' his trade mark wrasslin' hood 'n' fancy duds! "y'now son,"CAPTAIN DYNAMITE told BONGO BUTT magazine in an exclusive interview last month,"this is a test of just how far a brave man can go without a 3 man safety net.I guess i'm sort of a ROCK 'N' ROLL EVEL KNIEVEL, goin' out there in front of those crazy kids with just THE CAPTAIN 'n' his old guitar..but hell, it's easy to carry on churnin' out the hits with 3 other masked mooks.This time around i wannatake music down to another level and bring some razzle dazzle to the one man band arena and prove to the world that a simple wrestlin' man can reach his goals...oh yeah, it also means i get all the beer for myself!"

Catch the CAPTAIN DYNAMITE CAVALCADE OF CRUD at...

"Due to Nikki ‘s recent passing, a gig I was looking forward to, became one that I approached with a fair amount of dread. Lindsay had asked me if I would write a few lines about the gig and I anticipated a few paragraphs. Once I started, the memories came flooding back and as you can’t put your arms around them I thought I’d share them with anyone that cares.

First, a bit of background - I ’m lucky to have been a friend of Nikki’s since the early 80’s when I first met him at a gig at the Africa Centre in Covent Garden after being persuaded to check out a guy who had been described to me as a cross twix Johnny Thunders and Neil Young by an equally old friend of mine Mr Pedro Mercedes.

Being an obsessive Thunders fan I needed little persuasion, but we somehow managed to miss almost all the gig. Pedro and I sheepishly approached Nikki who called us over for a chat. Such was his easy going nature after a few minutes it was like we were long lost friends, not just fans.

We soon did become friends and had many weird and wonderful adventure,s meeting up at almost every Thunders gig in town and at the especially memorable Heartbreakers reunion gigs at the Hacienda and elsewhere. Pedro was also involved in the legendary Pipeline Club in Soho, one of our happiest nights was the time Johnny agreed to play there - more on that night can be found in Nikki’s book which I am sure will come out one day…

I got roped in to play drums (very badly) in a few ad-hoc line ups with Nikki in the mid 80’s, and in return he would often join my band (Bad Karma Beckons) on stage for the odd Dolls/Thunders/T. Rex cover, whenever we shared bills or if he was in town.

Ironically, I last spoke to Nikki after his recent 12 Bar gig and he asked me to email my recollections of us playing together way back then for his autobiography - emails and photos came back and forth and I was really looking forward to fine tuning my addled recollections in person. Unfortunately, I received a call from Nina (Antonia) about the tragic news from New York.

It was fitting that I met up with Nina and Pedro prior to last night’s gig and appropriate that we waited in a pub called “The Angel”, while Dave Kusworth, Darrell Bath and Paul Caton, tonight’s Jacobites were sound-checking.

Off now to the 12 Bar which was filling with many familiar faces of friends and ex band members throughout the years. As reported earlier , Dave decided to go ahead with the gig in memory of Nikki, who of course would have wanted the show to go on!

The atmosphere in the 12 bar was very strange, almost as though Nikki’s aura remained from the last show. All around people were talking about him, exchanging stories and tales in abundance. Without trying to sound like an old hippy, you could feel the love and affection in those four walls.

It was good to see old friends again, some I hadn’t seen for 15 odd years even though the circumstances were sad. I won’t bore you with names because I’m bound to forget to mention someone.

Sadly there were at least a couple of people that had seen Nikki play a only few days ago in the States and who were here to see him again unaware of what happened.

After being warmed up by a solo set by Knox (of the Vibrators) and Mark Mulholland, who someone informed me, has played with Nikki in the past, a good sized crowd squeezed it’s way in front of the tiny stage.

On the wall behind Dave, Darrell and Paul was a large black and white poster of Nikki playing on stage and by the side of it, a single (yellow I think) flower. The 3 Jacobites were seated side by side with acoustic guitars and Paul’s selection of mouth harps.

After brief intros the band took off and stormed through old faves like Big Store, Pin your heart, Kings and Queens, and Fortune and Fame it all seemed to be a bit of a blur but wasn’t at all a sombre affair. Everywhere people were smiling singing and shouting encouragement, banter and requests. I almost expected Nikki’s voice to somehow join in.

The band took it down a little for a touching version of Johnny Thunders’ You can’t put your arms around a memory, dedicated to Nikki, Desperate Dave and JT, which then segued into Lonely Planet Boy - now I had tears in my eyes.

The band requested and received refreshment in the shape of a glass of JD and ice each. And then surprised everyone by playing Peter Sarstedts’ 1969 hit "Where do you go to my lovely?" Slipping in a lovely touch by changing a line the 2nd verse as follows

"You live in a fancy apartment
Off the Boulevard Saint-Michel
Where you keep your Jacobites* records
And a friend of Sacha Distel, yes you do"

The night finished off with "Silver Street" and "First cut is the deepest", "Bring it on Home" The Faces’ "Debris", "Shame for the Angels".

I said my goodbyes, liberated a poster from the door and bought the latest issue of Bucketful of Brains, which, to cap it has Nikki on the cover and an interview inside.

While writing this, I received an email from the New York Dolls Forum as follows:

Speaking of "old days", the fantastic NEW YORK DOLLS performed a hot 'n' nasty set of classic tunes as well as at least a half dozen new songs at the legendary CBGB's on Tuesday night...Overall, this was a perfect evening of "punk music", and it was nice to hear them dedicate songs to the likes of Nikki Sudden, Arthur "Killer" Kane, and of course, the late, great, Mister Johnny Thunders...

I think Nikki would have felt so proud to get a dedication from a band that meant so much to him.

He lived, breathed, ate and drank rock n roll 24/7. He’ll be sadly missed but thankfully leaves a fine legacy of written and recorded work that deserves your attention.

It’s a shame for the mortals now Nikki’s an Angel."