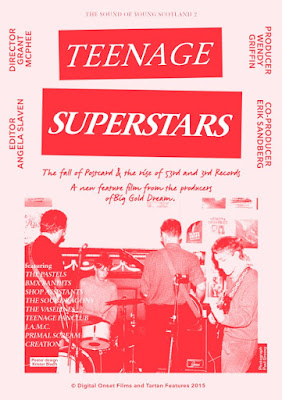 Saw Teenage Superstars yesterday, the second instalment of Grant McPhee’s two part document of Scottish music’s formative years and its connection with further afield. Indeed, I gave a lot of this local produce the rubber ear in the early days. A mixture of being obsessed with American “punk” before the term was turned into a half-assed brand. Much of this film is based around the west coast strain of pop. “Big Gold Dream” was the east coast take and I think McPhee did a good job. I went to bury it but couldn’t. Despite still intensely disliking much of the produce, the story was told well. Many of the perpetrators are good people. Just don’t ask me to listen to their music. Some aren’t, but they played their part too as life goes.

In the same sense, I never got Creation – or Postcard Records. Whilst I recognise the “scene” around these it took the interest shown from friends overseas to create my perspective. It took me a long time to admit that the Mary Chain made some good records. They were just such horrible oiks. As was another of their “kin” who I won’t even mention but he haunts the film like a bad smell. He has to be in there I guess because he’s turned out to be a pivotal figure. And for the mentions of The Cramps in the film, there’s no suggestion that they were briefly on the label that McGee ran. Joe Foster is good in this and it’s to the shame of some others that they didn’t make themselves available to support this venture. I have friends in Scandinavia and Spain that will LOVE this. I thought about them all the way through the film.

It defines the two cities that are just 52 minutes apart but spiritually what, I feel, like a world. The humour of Glasgow is intact and the appearance of several lesser known players is welcome. There’s definitely a career as Jack and Victor Version 2.0 for Duglas T Stewart and Sean Dickson beckoning. Grand to see the elusive David Keegan and mi amigo Martin Hayward here.

Ian Hoey hosted a wee Q+A after the screening with Wendy Griffin (Producer) and Angela Slaven (Editor/co-producer). All concerned worked to the wire to prepare the film for these EIFF screenings and there are plans to tour a double bill in October or thereabouts. I presume that means throughout the UK? Plans are underway to screen it further afield and I can feel the anticipation across the waters big and wee. There’s even a wee glimpse of the cover I did for the 53rd and 3rd release of “My First Band” by The Ben Vaughn Combo in here and reference to the connection between TFC and Alex Chilton.


You get one chance to do something like this and on this occasion the years of selfless pursuit have pretty much nailed a decent snapshot of what it was to live through the fermentation. The inclusion of Thurston Moore here and Kim Deal’s voice over connects the scene back to the US. The subject matter of this episode in particular really chimed with America’s burgeoning underground at the time. Who could have thunk it? Bellshill spawned several monsters whose influence has carried way beyond any feasible expectation. It’s doubtful such magic could ever happen again because it would be contrived and hijacked straight out of the box.

Posted by Lindsay Hutton at 12:23 PM No comments:

DAMN - THIS IS GOOD!