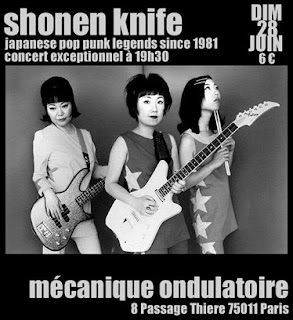 Posted by Lindsay Hutton at 9:13 PM No comments:

Some sad news for sure tonight but let’s accentuate the positive a little...

In the last couple of days I’ve seen two still living, breathing exponents of the arts that have made everything we hold dear responsible. In terms of influence they’re right up there. Giants. Maybe not household names but individuals who pervade every aspect of what I consider to be true culture. I’ve considered the possibility that both can enjoy a level of popularity now because they’re part of the broad canvas that The Cramps taught us. It’s true to say that there was always an aspect of awareness but they piqued an insatiable appetite for cool and crazy stuff. I was just talking the other day to someone about how the landscape would be very different if it weren’t for their direction.

I blew out the chance to see the first two episodes of True Blood in a cinema setting in favour of Wanda Jackson’s first Scottish appearance in, she says, more that 25 years. I think it must be way more than that and would welcome information with regard to when it might have been. It was good to see a decent turnout for this auspicious occasion and two bucketloads of kudos should go to Ms Holly Calder for pulling it off and making it possible.

It’s important to create a proper environment for an event like this and the DJ action (Aaron from All Tore Up and another guy, can’t remember his name) provided the sounds to do that alright. The band that was providing their services to Ms Jackson opened. The Bottleneckers are a first class blues/r&b ensemble with an extensive repertoire. It’s all a wee bit tidy and concise but meticulous with not a grain of excess flab. They opened with “Georgia Slop” which made me think, where is Barrence Whitfield these days?

I’ve seen clips of Wanda with some pretty hokey bands but this wasn’t the case here. This combo swung like nature intended, like she might have had back in the golden days. And what a voice, that was perhaps the most remarkable thing of all. It’s a total hits show and she narrates the story of her career well without the aid or any powerpoint presentation. “Funnel Of Love” was absoflippinlutely amazing. It’s something she’s only recently started to perform again, being that it was considered too risqué for someone so devoutly Christian. I’m please she saw the light. Mr Duff said that this was the best of the 4 times he’s seen her and he knows those onions.

The one downer was the drowning out at some points by a section of gibbering bastards in the audience. These people have no respect for their elders or betters. None whatsofucking ever. It’s time that venues employed quiet police to muzzle these divots. That aside, Wanda appears to have a lot more energy than I do, several years her junior. Keith Bruce's review from The Herald is here.

It wasn’t possible to report in yesterday, I took advantage of the weather to try and keep the immediate area around the bunker in reasonable fettle. “Cutting the grass” isn’t a euphemism incase you wondered.

Yesterday’s movie going was much more successful than that of the weekend. Kicking off with a screening of "The Wild Angels" at 1pm, this was not only the last remaining print of the film – it was also introduced by Mr. Roger Corman himself. Quite a thrill. I imagine that everyone reading this is familiar with the film and to hear Davie Allan blasting out in the pictures is a pretty groovy thing. I’d made the executive decision not to attend the Corman in person thing to see the European prem of “The Missing Person” so this was a real bonus.

I think that this was another good move because “TMP” is simply a great piece of work on every level. I unreservedly recommend it to anybody with an interest is seeing a simply terrific film. It looks great, the story is good and I don’t think that I’ve seen anything this good in some considerable time. Don’t want to give away anything about it in the hope that you’ll catch it when it’s properly released. There are a couple of sequences where the script is just of such a supreme high order I can’t begin to tell you. Plus it includes the fantastic Amy Ryan in the cast and as executive producer. Indeed it was she who put the director, Noah Buschel on to Michael Shannon who looks not unlike Lux.

The director was on hand to talk about the film and he sounded a little like Billy Miller. An ardent New Yorker, his love for the disappeared aspects of his city just made him all the more likeable. I reckon that he’s going places. My original exec decision was based upon the consideration that Ms Ryan might attend. Yes kids, sad but true, deluded fanboy that I am. The soundtrack includes Freddy Fender and Bud Powell and the closing credits contain what may be a typo or maybe not for a “grahpic designer”.

Walking past Henry’s, I noticed that The Suicidal Birds and Pony Pack were playing later. I hesitated for a moment, thinking I might hang about but remembered that it was a school night. Heading for the train, I passed some hipsters on their way to the ATP event. Some maybe even had their swimming cosies on under those trenchcoats. We’ll never know.

Taking advantage of the excellent weather, I walked, or rather ambled, the 3.3 miles home. Past enough cut grass to make my peepers smart to the extent that sitting in front of the computer wasn’t an option. I have one more film to go on Friday. “Baraboo” by Mary Sweeney. This will provide my customary David Lynch related section of the programme.

Posted by Lindsay Hutton at 7:18 PM No comments:

I was all set to bring you up to speed with the last couple of days when I caught this news that took the wind out of my sails. Having never met him, there are no anecdotes from this end but few will ever forget discovering "Pushin' Too Hard" via Nuggets in 1972. For anyone who might not be familiar with the band in the UK, you've all seen the Lynx deodorant ad with "Can't Seem To Make You Mine" right? Anyway, another pioneer down.