STEWART CRUICKSHANK - I salute you sir! 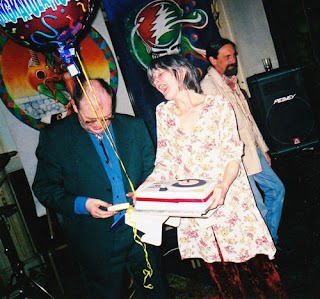 This time last week I was totally unaware that Stewart had been admitted to hospital. And even when I did find out, I figured that I’d likely be visiting him this weekend. But for some inexplicable reason, this was not to be and he passed away in the wee hours of Monday 16th November.

The soonest I could arrange to go over there and see Lorraine was Wednesday. It was odd getting off the train at Queen Street and heading for Hillhead with the prospect of not meeting up with Stewart. Coming out of the subway beside the Starbucks that used to be the fabled John Smith’s Bookshop, scene of many a good time – it was like some twisted play on “It’s A Wonderful Life” with our guy getting the George Bailey treatment. The west end is littered with markers and walking up the lane on such a driech night it felt like NY maybe did when Joey passed away. There was just something missing. There's a Waterstones where Roots and Fruits should have been for fucks sake.

But anyway, I made my way to their place and Lorraine was dealing with everything in that classic, stoic West of Scotland manner. I’m sure the enormity hasn’t hit her yet, nor has it dawned on most of us. We know he’s gone but we’re hoping it’s actually just a nuclear Cruickshank wheeze.

If you ever tried to leave a show, pub or restaurant with Stewart, you were in for a long wait. He had to say goodbye to everybody he knew. And that meant he had to say goodbye to everybody. It was the same on the Byres Road or indeed everywhere else in town. The landscape of Scottish Music would be entirely different were it not for him. Pure and simple. He struck all manner of blows against the BBC Empire to keep programming at BBC Radio Scotland at the forefront. He was responsible for successful show after show. That included his most recent stint with Iain Anderson and he should have been on points commission for coining the term Celtic Connections. 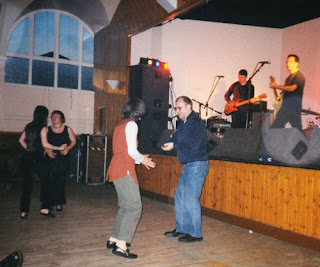 In terms of people skills, this guy was the master. His attention to detail is unsurpassed and he forgot more about music than any of us ever knew. No one ever came away from an encounter with Stewart unaffected by his enthusiasm. There’s not one person that would tell you otherwise. And even if they did, then they’d be lying.

So many adventures, too many recount but a friend reminded me of the time we dj’d together at The Nomads 20th Anniversary show in Stockholm. Segueing” Donald Whaurs Yer Troosers” with “The Faith Healer” was a masterstroke. The night we got back from that trip was when Joey died and we swapped stories and played Ramones records all through the night.

He was also obsessed with trains and well, heavy machinery in general. I recall there being an open day in the then BP oil refinery here and we took he and Lorraine along there. It was like a kid wandering into Disneyland. Much of it has been demolished now but in those days it was like a Blade Runner set. Just this morning, I went for a walk along to the Railway Preservation place in Bo’ness. Last time we stopped by there on our way to a screening of "The Party", he was reciting the histories of the steam trains that passed below us and it went on. And on some more. I was rolling my eyes but that says more about me than it does him. Sometimes I think he did that for devilment. Our trip to Madrid was something that really fired him up. I thought he was actually dead the day after the Dahlmanns show at Wurli because I couldn't get him to bloody answer the door of his room or the phone. I think he finally surfaced around 4pm. Which when I think about it was actually the time zone he operated in anyway but I was frantic.

One of the most excited I ever saw him (and anyone who has been with Stewart knows that atomic Duracell bunny mode all too well) was meeting Pirate Radio pioneer Ronan o’ Rahilly after the MC5 film premiere where he interrogated the guy as only he could. Another cool memory is when Amy Rigby was playing Glasgow and she brought her daughter Hazel with her on this particular trip. They stayed with Stewart and Lorraine and Hazel was so taken with Stewart that she wrote a short story titled “Crookshank” about him. If I ever find it and it's OK with Hazel then I'll post it. Those Rigby women are sharp.

Kathryn Ross, the lady that performed the Humanist service did a great job with material supplied by Lorraine, Richard (Bull) and Stewart’s oldest friend, the one and only Brian Hogg. Ian Anderson did a recitation of “Remember” by Christina Rossetti. It was a rollercoaster of emotions. The place was rammed. In the car back to the “aftershow” we posed the question, is there a fire limit in a crematorium? I still don’t know if everyone got in there. I sure hope they did. 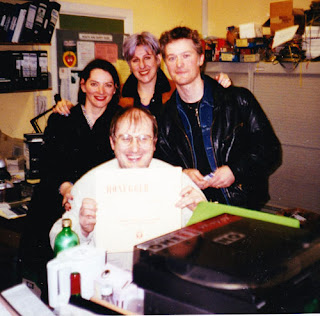 So his crew shared stories while songs were sung and tunes were played. Phil Cunningham’s “On the Edge of the White Rock” air hushed the house. Someone has to record that. The moment I really lost it was when Amy’s “Don’t Ever Change” came on. That one reduces me to rubble in any normal situation but here it was too much and I went into full plotz.


There are plans and schemes taking shape for when the dust settles. That could take some time but there will be much celebration of the old bugger in 2016 and beyond. This was a wake-up call to each and every one of us who ever came into contact with him. Though we’ll never get the hang of the concept of “Cruickshank Time”, I think that everyone is resigned to try and carry on a little of what we thought would be around forever but for some reason was snatched away way too prematurely. I am genuinely sorry for those of you that never went under the thunder of Stewart Cruickshank.