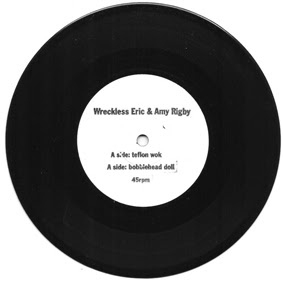 This leaving and returning home in the pitch black is doing my head in. I can’t vouch for global warming or whether it’s not just a cycle but for my money it seems to be darker than ever. Maybe it’s a symptom of the climate change or even my deteriorating eyesight. The reality of it is that it doesn’t half wear me down. Two weeks from today and I won’t have to make the trek again until next year comes a-knockin’. At the risk of wishing my existence down the swanee, it cannae come quick enough.

So pondering the possible explanation for the big jump in visits at the weekend, If I type in here “The Next Big Thing 2010” then all the people who actually google that (other search engines are available) might end up here. Then they’ll get flustered and wonder what the fuck is going on. That has to be a good thing right? Cheating people out of a few seconds that they’ll never get back?

There’s nothing more important today than the fact that Wreckless Radio is back on the wires , either cable or wireless depending on your means of access. And during this half hour you’ll hear The Seekers, Young Fresh Fellows and the debut of Eric and Amy’s new 45 "Bobblehead Doll" that you can buy by clicking right here. If I was you, I’d secure one now because there’s going to be a run on these once it gets “playlisted”. I expect "Teflon Wok" will appear during the next instalment.

I’m listening to the show right now on tenterhooks waiting for it to come on after which there’s stuff to be attended prior to tomorrow evenings excursion to see what a couple of wags have seen fit to call The Two York Dolls.
Posted by Lindsay Hutton at 5:49 PM 1 comment:

(Thanks to Chris for the info)
Posted by Lindsay Hutton at 6:56 AM No comments:
Newer Posts Older Posts Home
Subscribe to: Posts (Atom)