About 10 minutes ago, Duglas T Bandit called me to say that he had been told that Lux Interior died over the weekend. When I fired up the computer there were 20 messages asking if i'd heard anything. The answer is no and I sincerely hope that it's not true.

Having said that, I'm trying to substantiate this. In these fucked up times, I guess it's not out of the bounds of possibility, however this internet thing has a lot to answer for so let's all hope that it is indeed a crock.

Update: I'm about to shut this thing down for the night but let's not forget that these are intensely private individuals. If it does turn out to be true then it's a pretty devastating thing. Have faith though and more importantly, don't add to the possibility that it could be nothing more than rumour.
Posted by Lindsay Hutton at 11:25 PM 3 comments:
I had to turn the radio off tonight. These arsehole politicians carping back and forward while we basically head for the U bend. The dawn of "correction" has become like groundhog day. Today, I found out what I would get should one be made redundoid and don't mind telling you, it isn't chuffing much. Can't say I'm worried because it's happening to bigger and better than me every minute of every day but it is a bit pre-occupying though.

With regard to the aforementioned carping, I prefer action to blah. One of these drongos looks like Frankie Howard and the other looks like he just crawled from the furthest reaches of Harry Enfield's Y-fronts drawer. Neither of the dumbasses is up to the job at this point in our collective downfall. There's a big "for sale" sign sticking out of the UK mainland and nobody is buying. There are precious few assets left to strip anyway. So, there could be a new adventure on the horizon. It's unlikely to lead to an increase in blog posts though so you can breathe a sigh of relief on that particular score.
Posted by Lindsay Hutton at 6:06 PM No comments: 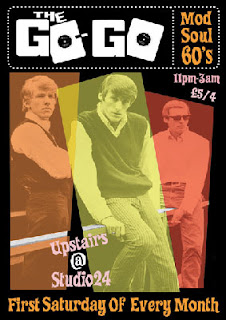 THE GO-GO!!!
FROOG SHAKE
AND GROOVE
ON THE FIRST SATURDAY
OF EVERY MONTH.
UPSTAIRS AT STUDIO 24, EDINBURGH.
Posted by Lindsay Hutton at 5:06 PM No comments:
Newer Posts Older Posts Home
Subscribe to: Posts (Atom)