The latest hit and run on “the London” entailed the usual whirlwind of activity. When will I learn about not trying to pack to much in on such a trip? Sometime never mayhap but in the interests of survival, this could be an avenue that warrants exploration. Maybe in time for the next sojourn on December 11th…

Got to town around 2pm and made for the bustling Lie-chester Square. A teeming hedgerow to be sure and the peaceful bolthole known as the Phoenix Artists Club wasn ‘t opening until 5 but a suitable alternative was found that allowed the afternoon’s social to proceed. Mr Thewlis is deeply pissed off with the PAC though and we may have to enlist a potential alternative for future soirees. I’ll tell you something though, their pizza and chips is pretty damn good. 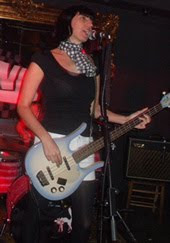 From there to meet the Rev. Nick West at Kings Cross in order to head for the uncharted territory known as Stoke Newington. It’s a nice area of town but a bit of a bastard to get to although the buses are a skoosh when you get a beat on the inside track. Things were running a wee bit late at The Drop and it was around 9.30 when The Boonaraaas!!! Took the stage. It’s always a pleasure and they were top notch as always. I expected Tine to be back and the “No Blokes in The Boonaraaas!!” lobby grumbled a bit but on the whole were very pleased to have Trich, Christina and Laura “in the house” as they say in the dance music subculture. Of course the Boonaaas are practised in real dance music and not the disco annexe. Photographic evidence is presented here and Christina has been charged at looking into how we can make a visit to Scotland happen. 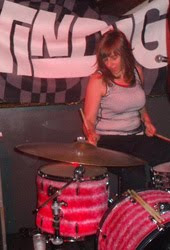 Thee Vicars seem to be introducing a younger element into the pleasures of garage beat and this is a good thing. The fact that I find it all a bit underwhelming is neither here or there. I salute their crusade and what they’re doing in league with Dirty Water. Good to see PJ and thanks to him for assembling the evening. It got pretty damn busy in that room. Los Explosivos are a primo live act that mixes a savage punk rock flavour with a couple of dashes of The Hellacopters sieved through Grand Funk. This Mexican combo more than live up to their name and detonate on a number of occasions. They have a great entourage too and a night in Madrid at the Wurlitzer with this crowd would likely be quite the concoction. From there, back into town and a wander over to The Betsey Trotwood. A very groovy Clerkenwell hostelry that played host to the first stay behind in the capital that I’ve attended in a very long time. A cool crowd (Hey Amy, Hey Gurbir) supped and danced into the wee small hours and it was somewhat reassuring to have an autographed poster for the BMX Bandits “Down At the Hop” hanging on the wall at the end of our table.

I’m keen to return there in the daytime to sample their pub nosh. From there, a further wander through the deserted streets of that area of London where urban foxes of the furry variety went about their business. Stopped off at the BOB HQ for literally 4 hours before it was time to once again head north. Pretty much died upon returning to the bunker. Hoping that the Boonaaa gals made it safely home to Germany.

And then, it was Monday again…
Posted by Lindsay Hutton at 7:53 PM 1 comment:

(Thanks to DS for the link)
Posted by Lindsay Hutton at 5:48 AM No comments: 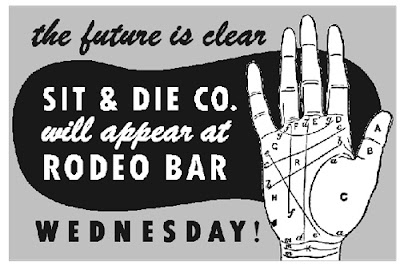