I received the sad news today that top Glasgow promoter and friend of mine Billy Kelly has passed away after a long battle with cancer.

I know many of my friends have had dealings with Billy when their tours hit Glasgow as he was the main man behind Soundsfine Promotions who ran the Big Big Country and Big Big World festivals as well as numerous top gigs in between. They also promoted gigs in other parts of Scotland.

Billy was also a frequent visitor to festivals like SXSW where he came into contact with many more acts and other like minded promoters.I had hoped to see Billy at the recent Dale Watson concert in Glasgow but it was not to be as he was in hospital but I did have some correspondence with him afterwards.

Billy gave me lots of work and the chance to open for some great acts including, Dale, Big Sandy, Slaid Cleaves and many many more. I also got to see many more class acts, most times for free as Billy wouldn't ever let me pay. I for one will miss the enthusiasm, nay passion, that he had for music.

My thoughts at this time are with his wife, Anne, and their children Billy and Vicky.

It is one hell of a sad day for roots music in Scotland.

This was a shock and John is right. It’s a sad day for music of all persuasions.
In my opinion, this guy presented a level of service to music promotion and gentlemanly conduct that is rare in the trade he was in. His attention to detail and old school way of operating was an inspiration. He always had time for you, there was none of the self-important nonsense (I’m being diplomatic here) that so often comes with such territory. He built up the Big Big Country and Big Big World events that took place in May and October respectively. The difference was that he curated as well as promoted. That was the ace he had up his sleeve.
My last contact with Mr K was to try and get him to book The Bambi Molesters for BBW, some Croatian surf for the broad canvas. He told me he’d try and work it out. It didn’t but I’m sure it would have happened eventually.

Billy Kelly made a difference and I consider it an honour to have known him. I hope he’s riding those high plains and my thoughts are with his family at this sad time. Cheers Billy, thanks for everything...
Posted by Lindsay Hutton at 6:32 PM No comments:
This coming Friday at Debaser in Stockholm (Rock City!) 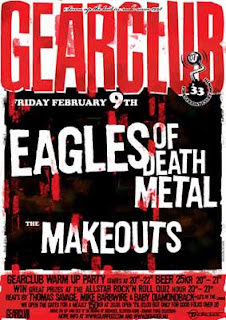 Posted by Lindsay Hutton at 6:09 PM No comments:

The Scientists and Alan Vega are part of The Dirty Three curated ATP festival in Butlins, Minehead this coming April...
Posted by Lindsay Hutton at 4:44 PM No comments:

(Thanks to Mr Percival for the link)

Posted by Lindsay Hutton at 10:32 AM 2 comments:
Using up the last remaining vacation days means trying to tie up loose ends... but there are so many which have unravelled to the point of no return. But anyway, some stuff that'll keep you amused for a wee while...
Mr H flagged up this Wooden Shjips article at Dusted. You can also listen to their shjotguntastic "Shrinking Moon For You" as a musical backdrop.
Mr Rafferty dropped me this link for the new Joan Jett video. And you figured they didn't make them like this anymore? So did I... did I ever tell you that I stood next to JJ at a Flamin' Groovies show once?
Ben ran these clips past the Staysickers... this version of "The Explosives" seem a little clunky to me in their attempt to bolster Roky but i'll let you make out your own mind. Mr Gart also reminded me about this New Bomb Turks dvd from their show at the Cas Rock in Edinburgh some moons ago. There's every chance i'm in it...
Bjorn provided this link to the Barracudas film available as bitesize chunks on YouTube some time ago but I only just found it (er, remembered) when i was looking for something else.
I was never what could be construed as a Clash fan but some of you might be, so check out Strummerville.
Songs The Nomads Taught Youse, J found this on ebay... and at the other end of the financial spectrum, Mr Percival hepped me to this.
So that'll keep you going meantime. Just heard that today is the day that people are most likely to call in a "sickie". Why don't they have pre-publicity for that type of event? I wasn't born to work or follow. Such is what passes for life.
Posted by Lindsay Hutton at 8:31 AM No comments:
Newer Posts Older Posts Home
Subscribe to: Posts (Atom)