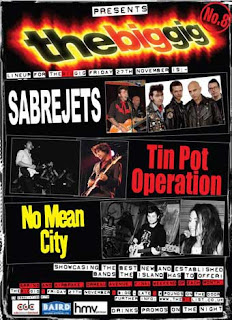 I just realised that this is tonight and I hadn't posted it...
so if you're in Belfast, this is your pitstop for tonight.
Posted by Lindsay Hutton at 6:34 PM 1 comment:

Of course, it's not possible to be everyplace but I have more than a hankering to be in Stockholm tonight. Joining my homies at the historical epicentre of the garage disease. The Nomads started off their record-releasing life by celebrating the band that nobody thought they'd ever see. And here they are together. I think that The Fuzztones opened for The Sonics in Berlin, right? Rudi too, was a keeper of the faith.

So there'll be high jinks out that way tonight. Hell, even Mr Ulf will be making the scene. He doesn't leave the house for just anything. So we'll be hearing how that goes too nae doobt in the fullness of time.

I finished the little "Eating Raoul" zine and have a limited amount of the printed copy and also a PDF for anybody who cares. Just e-mail me and I'll send 'em out. "While Stocks Last". I hear that the Kid Congo show last night was a stoatir too. Nice to hear that there was a healthy audience despite all the last minute organisation. Good job by everybody that pulled it together.
Posted by Lindsay Hutton at 4:14 PM No comments:
Newer Posts Older Posts Home
Subscribe to: Posts (Atom)