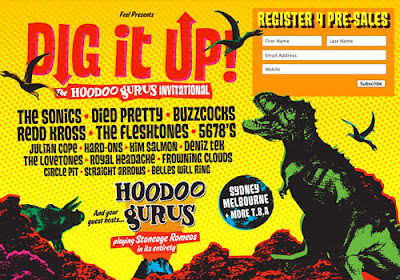 Come along as the Hoodoo Gurus invite some of their favourite acts and key influences for a one-of-a-kind tour that celebrates 30 years since the release of Leilani (le Hoodoo Gurus iconic debut 7”) and a career that has delivered more than 30 timeless hit singles (I Want You Back, Bittersweet, What’s My Scene?, 1000 Miles Away, The Right Time et al). Their nine studio albums have also enjoyed critical and commercial acclaim in equal measures and they have the reputation of being one of Australia’s most consistent and powerful live acts.

Invitees include the legendary garage-rock pioneers The Sonics, brothers-in-spirit, Redd Kross and The Fleshtones the moody & compelling Died Pretty, Japanese all-girl legends The 5.6.7.8’s plus a hand-picked selection of local celebrities: Royal Headache, The Lovetones and Hard-Ons among them.

But that’s not all! In a personal celebration of this milestone, the Hoodoo Gurus have announced they will perform Stoneage Romeos (their landmark debut album) in its entirety plus a selection of their other hits. How excitement! Stoneage Romeos is a permanent fixture on various lists of Australia’s top albums including the 2010 book “The 100 Best Australian Albums” and Triple J’s Hottest 100 Australian Albums of All Time in 2011. Stoneage Romeos was also the subject of its own tribute album ‘Stoneage Cameos’ featuring covers by The Living End, You Am I, The Drones and a host of high profile contemporary acts of the day.

But that’s still not all…

As part of the celebration of this momentous milestone in the band’s career, Sony Music will release GOLD WATCH: 20 GOLDEN GREATS, a new Greatest Hits collection covering the bands entire 30 year career including the new single “Use-By Date”.
“Gold Watch” will be released on Friday 16th March.

Tickets for all shows are on-sale Monday 30th January. Sign up to the Dig it Up! mail list @
http://www.feelpresents.com/ for your chance to purchase pre-sale tickets.

Don’t miss this one-of-a-kind celebration: Dig it Up! The Hoodoo Gurus Invitational.
(Thanks to the Rev. Martin Percival for the info)
Posted by Lindsay Hutton at 7:21 AM No comments:
Newer Posts Older Posts Home
Subscribe to: Posts (Atom)