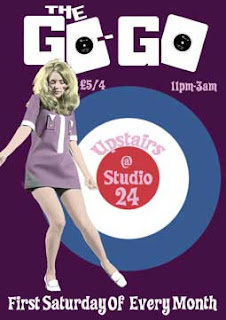 Another step closer to the ol’ senior (as opposed to senór) citizen’s travel card then and here we are on Guy Fawkes Day. Not something I care for but it would be good if those who wanted to gawp at fireworks could go to one of these “organised” displays. Away the fuck from my locale. Maybe if the rain stays on the idiots around here that literally burn money with have to postpone their whizzbang fest. Unlikely though. They’ll light that blue touch paper in all weathers. Is there something we can do to them that’ll scare these tosspots the way that they put the shits up animals and old people who really just want to watch Coronation Street or whatever.

This should not be construed as having anything to do with the onetime, er, “musical” combo of the same name from Dallas. Them I like.

OK, it's time for another instalment of The Go Go...

The night before, tomorrow (6th) Penetration are at The Citrus Club with The Lurkers. What year is it again?

Also coming right up, but down "the London" some Maher action as Tori and Reiko Kudo appear at Cafe OTO.

The rain is off so I expect that the bloody noise is about to start so I'll be kicking up some of my own. Tomorrows postal strike appears to be off so that's something. Significant movement in the negotiations eh? Who'da thunk it.
Posted by Lindsay Hutton at 5:09 PM No comments:
Newer Posts Older Posts Home
Subscribe to: Posts (Atom)