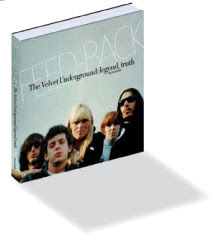 Here's the scoop on that Velvets book...
This selection of interviews and writings by Spanish Velvet specialist Ignacio Julià draws a chronology of the band and members from its inception in 1965 to today. Featuring the expanded and revised translation of his classic book on the band, the original 1986 Feed-Back —based on the longest interview ever granted by guitarist Sterling Morrison—, it has grown to be a deluxe edition crowded with pictures and memorabilia that now includes, amongst other features and reviews, exclusive interviews thru the years with Lou Reed (4), John Cale (3), Maureen Tucker (2), Doug Yule (1) and Nico (1).
As told to the author, who since the early Seventies has studied the band and interviewed all its members. The Velvet Underground didn’t end with Reed leaving in 1970, or with the untimely deaths of Warhol and Nico in the late Eighties, but with Sterling Morrison’s passing in 1995. He becomes a very alive central voice in these chronicles of a transatlantic musical journey that transformed the very foundations of rock’n’roll in the Sixties as much as Dylan or The Beatles did. From their avantgarde beginnings to pop music’s deepest mythology,
Feed-Back documents the rock icon while grasping for the flesh and truth inside the legend, in a series of exclusive conversations and critical appreciations that run from the early Sixties to the present, including the Velvets solo careers until today. Rare photographs and memorabilia illustrate this personal diary that will engage fans and newcomers alike.
Hardback limited edition, 20 x 20 cm (270 pages) Worldwide distribution by MUNSTER
Posted by Lindsay Hutton at 6:06 PM No comments:
Newer Posts Older Posts Home
Subscribe to: Posts (Atom)