Some new blog action you should check out...

The ARChive of Contemporary Music featuring Mssrs Hammer and Phast.

Lost-in-Tyme (thanks to Mr H for this link, if you figured YouTube was a rabbithole...)

Time for some air I reckon...
Posted by Lindsay Hutton at 4:29 PM 1 comment:
Checking out stuff here and there and keep getting distracted. I'm anxious about how The Sopranos is panning out. I read something that kind of disturbed me which I won't share because it may irk you also. So I put on the Au Revoir Simone album "The Bird Of Music" not expecting much of anything. I saw them when HS was on a co-bill at The Water Rats last November and never really got it. It was too loud and too monotonous in that room, a pity because the soundcheck sounded pretty darn groovy. Plus it's not realistic to expect anyone to follow Annika + co, as you know...

Anyway, this is a cool little summer breeze not unlike an altered Strawberry Switchblade. It's also like Martin Rev programming The ShangriLas. A couple of weeks after that London show they got in tow with David Lynch when he was doing a book signing. This also recalls his "Floating Into The Night" Julee Cruise period. Not as haunting but similarly hypnotic. I can hear now how he'd be smitten. So i'm not sure it works live but I think I'm gonna be coming back to this over the weeks to come. Christ, it might even make it out to the car tomorrow morning...
Posted by Lindsay Hutton at 3:24 PM 1 comment: 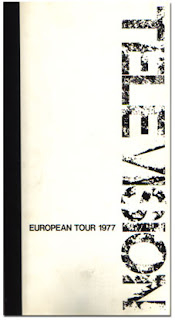 What was with that "Punk" Seven Ages of Rock travesty that aired on BBC2 last night?

Not only chronologically deficient, the whole thing was just a mess. History being reduced to bite-sized misinformation and yet another example of The Voidoids being mistaken for Television. This series has been "critically acclaimed" but in actuality does the documentary form an extreme disservice. And Charles Shaar Murray, I can't believe that he's indicted in the morass. But anyway, what the heck. It was good to see Joey and Johnny on TV for an instant but not to even mention the Dolls and The MC5 was utter sacrilege. The Stooges got one mention via the Pistols. Dearie feckin' me...

And loosely related to several ages of something or other, I found a tour itinerary book for Television among a pile of other stuff. I didn't realise that the band's first UK show was in Glasgow. I'm fairly sure they hadn't played in London prior to that but could be mistaken.?There's also a Verlaine autograph on NBT paper... I remember him being somewhat obnoxious but he was a punk, right? Ha ha. Also found a couple of Christmas cards from 1979 and 1981 from one Steven Morrissey and also postcards from Jim Kerr as Simple Minds made their way around the world. One from New York and another from Berlin from whence Young Jim claims he drew Noddy on the Berlin Wall with lime green chalk. Now that's rock'n'roll...
Posted by Lindsay Hutton at 10:36 AM 8 comments:
Newer Posts Older Posts Home
Subscribe to: Posts (Atom)