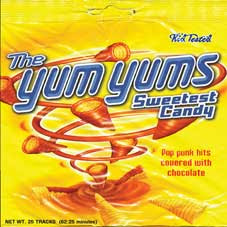 The counter-culture reminiscences were most entertaining and being that I'm not long in the door and have to fix myself something to eat then this will be short and, er sweet (now that's a nifty segue). This fine Yum Yums comp was launched in Oslo earlier today so we all missed that. Unless of course YOU were there? Anyway Morten had this to say with regard to reasons for making the scene...

2. It's a warm up show before we leave for a tour of Spain on tuesday 3. It's a release party for our latest compilation on Dave Parasite's Kid Tested Records It's called "The Sweetest Candy" and is a compilation of our more punkish song. for the US "pop-punk" people. The only "new" songs are the re-recordings of "Just Another Girl" and "9999999 Tears" from our "Funzone" 10" on Alien Snatch Records.

Ths shows with our exquisite friends Suzy & Los Quattro are as follows...

Stand by for a list of Fleshtones shows coming up in that fine part of the world also.
Posted by Lindsay Hutton at 8:07 PM No comments:
Newer Posts Older Posts Home
Subscribe to: Posts (Atom)