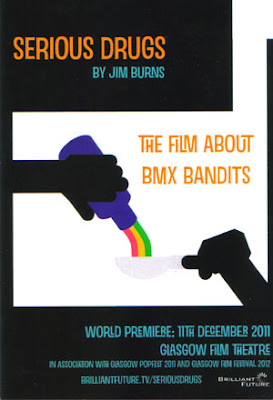 Not long back from a genuine world – as in never seen before in its completed state by anybody including the person that made it – premiere of “Serious Drugs”, a documentary about Duglas T. Stewart and BMX Bandits.

Four years in the making, Jim Burns took the task on did so because he wanted to get to the bottom of this music that helped him get a leg up to get over the wall of a nasty bout of depression. A one-time psychiatric nurse himself, this is a positive notion of mental health, to the extent that it could be re-titled “The Devil and Duglas T” although Duglas’ demons are maybe different to those of DJ.

“I'm not speechless, I'm still Duglas” said the subject when he joined the Q + A, chaired by Beat Patrol vet Peter Easton, the first man ever to play a BMX Bandits record on air and akin to being the first gent on the moon at the time. Over the shooting time, Jim was granted total access to the twisty, turny Bandit world. The context is fleshed out by bandmates, associates and family. At one point, Duglas’ mum says that he became the singer to prove his dad wrong. She was sitting directly in front of me at the screening and turned to his sister and said “that’s true”.

It was Jim’s family who pitched in on the making of this, the first film he ever made and quite feasibly his last although he did tell me about an idea he has for another that sounds like a hoot should it ever get beyond first base. “Serious Drugs” charts the progress from the early days of twee exuberance to the present. I recall my own reaction to the early BMX output as being remarkably similar to the lambasting Sounds review for “E102” revealed in the movie. It wasn’t until I actually met Duglas that it made any sort of sense and then somehow they got really good around the time they opened for Alex Chilton at Glasgow Tech, whenever the hell that was.

This will hopefully play film festivals and get a few other screenings along the way. Unlike the formula docs that come at us ten a penny, it paints the storyboard of a rather complex character at large in his own Trumanesque tragi-comedy. His always unique worldview reveals a hapless romantic that succeeds and indeed thrives upon swimming against the tide of crud.

You can’t prosecute a man for that, I believe? Not yet at any rate.
Posted by Lindsay Hutton at 8:54 PM No comments: