Not much chance of me getting there because of public transport problems but if you're anywhere around New Haven in Connecticut tomorrow (January 5th) then Andy Shernoff is in town... 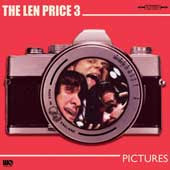 I saw The Len Price 3 open for The Boonaraaas!!! once. Whilst not outright bad they were just taking up valuable time and I haven’t given them a second thought until now. They always made pretty decent records but the new one “Pictures” is leaps and bounds ahead of the others in terms of punch. You’ll be aware that I’m not a “Medway” fan. Whilst I appreciate the devotion to analog, a lot of those bands just don’t do it for me. It’s not them, it’s me. Obviously.

But irrespective of who’s to blame the new LP3 is a power-poppin’ miracle that is meaty, beat-y, big sounding and rambunctious to the point that it’s likely to have you bouncing in any and all directions. Talk about upping the game? Really concise nuggets of hit-parade worthy songs that owes as much to The Records or the Brinsley’s as it does to the ‘oo. The title track clocks in at just under two minutes rendering it virtually Ramone-like in terms of snappiness.

This is their first release for Wicked Cool, although Little Steven’s label has issued their 2nd album in the USA. That kind of storefront could really work to get the word out. Nobody is reinventing the wheel here but at this stage of the game where a gazillion acts are fighting for your attention, this is one example of something being familiar that need not breed contempt. On this showing, I’d definitely give them another chance live. If they’re half as good as these songs then it’ll be a result.

The downside is that there’s a possibility that some of it might appeal to O-arse-Is fans because there are a few shards of phoney Beatle-ness. I have to qualify this though as being more akin to a US garageband take on the British invasion. The LP3 also have a cheeky monkey sense of humour too. “Mr Grey” could easily be sneaked on to “Sounds Of The Sixties”.

I wonder if Brian Matthew would be up for such a jape?
Posted by Lindsay Hutton at 10:19 AM 1 comment:
Newer Posts Older Posts Home
Subscribe to: Posts (Atom)