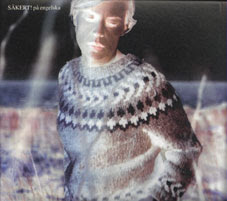 
Regulars will be entirely aware by now that I consider Annika Norlin to be one of the very greatest artists that I ever discovered during my long time doing this. Pure and simple.

That said, she remains a mystery to much of the world. The indictment of this album not having a scheduled UK release underlines why the music business is dying here - the blighters involved are largely deaf or worse. The US (Minty Fresh) and Germany have indicated that they lead the field while poor old Blighty is malingering under the delusion that it still means something.

The strange thing is that it took a number of plays for me to actually hear this in English. My familiarity with much of the material meant that I heard it in default Swedish. Her accent is very much present and the words sound to me to be delivered in a different way than with Hello Saferide. I’m not sure that makes sense now that I’ve typed it but I believe this to be true. ‘tis my understanding that these translations are literal? Maybe that’s why it took me so long to acclimatise.

The whys and wherefores are not important, all that matters is that you hear it. There’s one new song (“November”) and the other 10 are from the recent “Facit” and the debut. (“You’ll Be On Your Own).

The lyrics are one thing but never underestimate the power of this band, a whole different wall of sound that so perfectly complements the mood. The Arcade-freaking-Fire? Don’t make me laugh. Those Oja-delic guitars and the sense of space in the arrangements captivate a grandeur that you simply won’t find anywhere else. Take the omnichord on “Can I” for example – it haunts the song to punctuate the words, making them all the more poignant.

So, for now you can order it on this internet contraption. A few savvy stores will carry it too. How you get a copy is entirely your business just so long as you do.
Posted by Lindsay Hutton at 6:57 PM No comments:
Newer Posts Older Posts Home
Subscribe to: Posts (Atom)