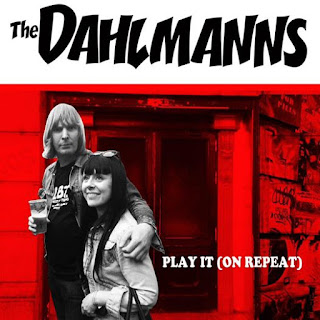 In the interest of full disclosure, I am very close to this release but I’m also very excited about it. This latest instalment by The Dahlmanns is their best yet in my opinion. If ever there was a definition of hit pop smash then these two songs are surely the sonic illustration of such a premise.

One original, one cover. I swear that I thought Line had written “Do You Want Crying” and had no idea it was a Katrina and the Waves song. In that time honoured tradition of picking material – and adding to it – this was a master stroke. “Play It (on Repeat)” is an original that stands up alongside any of your anthems. “Faking unaffected” just won’t cut it. I challenge anyone in radio to programme it as an antidote to that anodyne urban slop that they dole out on a minute by minute basis.

“... Crying” is a tour de force. When the guitar outro comes in at then all bets are off. The first time I heard it, I was gasping for breath so hard that I almost needed oxygen. And that sensation has continued – on repeat – every time I hear it. The expression “on fire” is often overused but this is an incendiary a guitar run as I have ever heard. And I do mean EVER.


They really upped the ante on an already high-fallutin’ catalogue with this one and yes, there will be a vinyl edition coming down the pike. Meanwhile you can get a CD-ingle or a download (via CD Baby) from those savvy folks at the Pop Detective imprint out in New Jersey, USA.
Posted by Lindsay Hutton at 6:55 PM No comments:
Newer Posts Older Posts Home
Subscribe to: Posts (Atom)