I discovered Groover Recordings whilst trying to track down stray Hello Saferide tracks. Thanks to Martina from Razzia, I got a direct line to this fine organisation and wasn’t quite ready for the revelations of the label output. Christian Örjestål is the brains behind this outfit. He compiles albums of mainly Swedish acts doing covers and originals called Jeans & Cover. There are two volumes of that and the third is The World Turns All Around Him (A Tribute to Gene Clark). Gene & Cover – geddit? 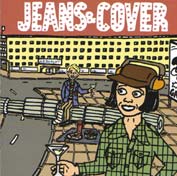 Anyway, Volume 1 is comprised of cover songs of quite unlikely candidates like Hall and Oates “Rich Girl”, Wham’s “Careless Whisper”, A hillbilly run-through of The Hives “Hate To Say” and Richard Marx’s “Hazard” as covered by The Martial Arts. We’ll come back to them in a wee while but the lovingly crafted comp is like a cleverly pieced together radio show. The trick is in the curation and the ability to identify a great song. Perfectly executed and it’ll make you rethink your jaded perspective. I guarantee it. You knew that David Essex’s “Rock On” was cool right, well the reinterpretation here is at once faithful and also fresh. I don’t mean that in some lumpen rap sense. This one also contains one of those aforementioned HS nuggets. A song called “Teen Line” by a Milwaukee group called The Shivvers that I never heard. If any further proof was needed that Annika Norlin could save the world, at least in a popular music sense, then this is it right here. 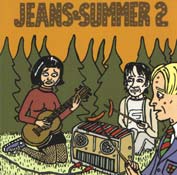 Volume 2 is similarly constructed like a vinyl album. Put together with care, unperturbed by the notion of shuffle play. Exquisitely high quality pop with a lustre like well-treated quality furniture. You can scratch the veneer but you won’t damage the majesty of the piece. GR are very well connected to the international beat that can’t be beat. This is where “Highschool Stalker” came from for “Introducing… Hello Saferide”. “On the alta vista… twice on the yahoo”. The best internet reference since “Maria Bartiromo”. Other standouts include the pre-Flop Rusty Willoughby’s “Dead Lavender”, Roger Manning Jr’s Davy Scott-esque “Sleep Children” and Sator man Kent Norberg’s “Ah Jesus”. The Lisa Marr Experiment weigh in with a smart wee murder ballad called “The Return of Donna Lee” that makes me think of Dave Alvin. 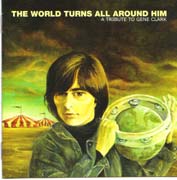 The Gene Clark special has an Allison Anders liner note and is illustrated with Blythe Dolls. It has a kind of Macdonald brothers afterglow without there being any overt Redd Kross involvement. We’ll return to them too across the piece. It kicks off with ex-Mercury Revver, Jason Russo’s Hopewell doing “With Tomorrow” and The Digs giving “Is Yours Is Mine” a kind of Television-ish sheen. The Autumn Leaves weigh in with “She Don’t Care About Time”, I forgot just how drop-dead great they are/were. And here are The Martial Arts again… “Why Not Your Baby” is the missing link between country rock and Joe Meek making everything groovy indeed. If this introduces these songs to a new generation then it’s a job well done. These things aren’t thrown together but the end result is more than worth the probable wringing of hands and tearing out of hair. HS and Maia Hirasawa re-gender their contribution as “He’s The Kind Of Boy”. At this point I don’t need to tell you how great them art. 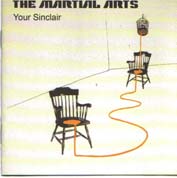 So this all brings us back to The Martial Arts who have an album out on the self-same Groover imprint called “Your Sinclair”. So this band embody Redd Kross, Dwight Twilley, The Quick, Phil Seymour, get the picture? Well it turns out that these are youngsters from Glasgow. Not somewhere in Sweden, or the US, or anywhere like that but just up the road a bit. Maybe I saw the name before and I just shrugged like I’m prone to do. This is a great, great album and I’m sure The Fratellis are perfectly nice guys but this combo should be stealing all their thunder. Who even knew that there was a world where Halfnelson (pre-Sparks for any Young ‘uns) and The Shoes came together with some TFC gusto, that patented West Coast (of Scotland) teenage ingredient that we export to the world? Wherever Greg Shaw is right now, I’m sure he approves wholeheartedly. The screenprint on the cd looks like an old RCA cop too. They sound way too young to be so savvy. Apparently Christian discovered them on a Redd Kross message board. He has a keen ear I can tell you and there’s a good chance that you won’t hear a better debut anytime soon. It makes me wonder what they’re like live because if they can even approximate this then it must be quite a night out. “Mod Val” could have been on “Third Eye” what higher recommendation could there bloody be? A 21st Century “Mondo Deco” even.
Posted by Lindsay Hutton at 5:31 PM 1 comment:

What Jay Sherman-Godfrey doesn’t know about knocking out a primo pop song simply isn’t an issue. This seven song, “mini-album” is more than testament to that. Jay has been pushing roots-rock to the kids since way before it had a pigeonhole. He was also the man who made the connection between Laura Cantrell and the good offices of Francis Macdonald. Here he’s aided by The Proprietress’ alumni, Jon Graboff and Jeremy Chatzky. Drums are by Phoebe Summersquash, who I last saw in the Sarah Silverman movie, “Jesus Is Magic”. Twoscore kicks off with “Bad Party” and this short, sharp collection is anything but. Gear like “Silver Shoes” can light up this often dreary slog. You can check out this choice produce at Jay’s cyberhangouts. His myspace and regular website are but a click away. Of the six originals and one Brian Wilson cover (“Girl Don’t Tell Me”) on this Able Mobile imprint release - I think the steel-fuelled saunter of “Someone Like You” is my favourite. Ooh sha-la-la kids... the twang has it!
Posted by Lindsay Hutton at 3:28 PM No comments:
Newer Posts Older Posts Home
Subscribe to: Posts (Atom)