Been catching up on some viewing too these past few days. Let's see, I started off with "Pineapple Express". That was pretty awful really, the highpoints? No pun intended were that Mountain and Humble Pie are in the soundtrack.

Season 1 of "30 Rock" hit the spot though, hadn't caught any of the TV run so it was cool to be able to get acquainted with it in a large chunk. Like a cross between "On The Air" and "The Larry Sanders Show" via "Rhoda", I'm gonna stick with this. There's evidently a lot more to Tina Fey than her Sarah Palin.

Finally, the Spanish horror flick [●REC], been meaning to catch this for a while and it's a pretty wild ride. Wish I'd seen it in the cinema, it'll keep you hooked right up to the end and George Romero fans will find much to get their teeth into here. Closing title music is excellent too but the text was too small for me to read. Tried googling it but it but so far no joy.

Anybody know who it is?
Posted by Lindsay Hutton at 6:09 PM 1 comment:
While I was listening to The Fleshtones tear it up on WFMU last night, I was trying to vote for Hello Saferide in the Swedish radio polls thing. I still haven't fathomed it out yet and Martina has been trying to coach me but I don't get it. Being as thick as three (one louder than the usual two) short planks, I can't get a beat on what they're asking me to do. It's not even vote rigging. I am honestly trying to go about my duty and can't grasp what has to be done. There is the wider question of do these kind of things matter? Well, I don't care about that, I just want Annika to win.

Have you seen the lighting in the second part of the "X" video when she mimes the "heart attack" lyric? Sandra Löv has captured a pristine Lynchian moment that combines the twisted 50's look with something altogether futuristic. The whole clip is high art and a reminder of times when it was possible to reach a large number of people through consensus. There's also an alternative version of the song on the HS myspace which is pretty damn spectacular.

So, I’ve been threatening some music coverage for a while now. Somehow the confuzzled nature of my existence at the minute makes it difficult to focus. I guess it’ll either bottom out or it won’t, meanwhile time is marching the feck on. 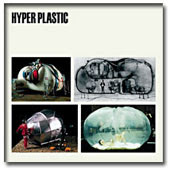 Hyper Plastic’s debut 10” on Novoton is a pulsating electrock’n’roll chestnut. Kicking in with a tasty little number entitled “Ron Asheton’s Loafers” it contains four songs that tick all of my boxes when it comes to solid entertainment. You can check out this sonic smorgasbord for yourself at the HP myspace. An impressive debut to be sure and a one man crusade against the often soul-crushing grind of what passes for popular music in the 21st Century.

The Nixe were the first Dutch all-girl punk band and their complete 1980 – 81 recordings have been collected on vinyl by the French label, Pollymaggoo Records. A project coordinated by our own Rt. Hon. Jeroen Vedder of this very parish ably assisted by Fenderwoods. J provides an extensive liner note too on these Utrecht girls exploits. He was right there with that able finger on the pulse.

He’s pretty much convinced that this wouldn’t be my bag and at the time it may well not have been. However, as I survey the seams that I often wrote off in pursuit of cheap rock thrills, this comes as a very entertaining surprise. I’d call it more post-punk or DIY buy there’s a certain primal energy that sounds more full-blooded than much of the UK material of this type. Often compared to Kleenex or Lilliput, presumably because of their gender rather than the music they make, The Nixe display a blatant pop edge. I heard Orange Juice’s “Blue Boy” on the radio recently and it actually sounded pretty good. maybe this condition has been caused by the time I've been spending in the Messthetics mines have conditioned my ears. Maybe it’s just been an acquired taste. I think this is limited so check out your favourite vinyl dealer sharpish before it vanishes, Volcanic Tongue definitely had copies. Try contacting Pollymaggoo too, I imagine their stash may be gone by now but it's worth a shot.
Posted by Lindsay Hutton at 10:36 AM 1 comment:
Newer Posts Older Posts Home
Subscribe to: Posts (Atom)