We hear every day about how the Spanish economy is heading in the same trajectory as that of Greece. It’s a kind of smokescreen I think. To mask the fact that the UK is punching way above its weight in the poorhouse stakes. However, if greed wasn’t the sickness it is and indeed value was measured in spirit or passion, maybe just the ability to embrace life then Spain is surely the richest country in the world trading to the tune of trillions.

If I didn’t have witnesses or indeed photographic evidence then it’s possible I wouldn’t believe the high jinks of last Friday. Suzy and Jon got married out Sant Cugat way and verily it was the stuff of legend. For instance, when was the last time you attended such a do where the couple burst into the reception to the strains of “Who Will Save Rock’n’Roll”?

However, we’re getting ahead of ourselves here – I was in Barcelona for a little under 48 hours. Arriving after midnight at Girona and taking the bus into town. I’d managed to sleep on the plane and was woozy but refreshed so it was straight from the bus terminal to Barbara Ann in a cab. I never took luggage to a party before but they didn’t seem to mind. As luck would have it, the president and the first lady were still there so I managed to have a wee beer with them before they left. As is the order of the day when I’m out in that neck of the woods we closed the bar. 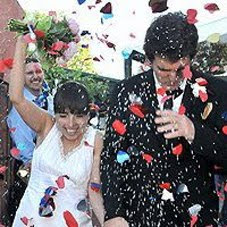 My old comrades Chris and Clive of Surfin’ Lungs were there and also some new compadres, including Osamu (Onepercentre) Iimura who had come from Tokyo to be a witness. Checked into the digs sometime around 3.30am and was up and out again a little after 9. I don’t like holing myself up in a room when I’m away. Breakfast at the handily located Cafe Dibar just across the street and then off to the beach. Chris and I ambled down to meet Clive, past the amazing looking fruit and veg stalls, chortling at the melons.

It felt right to be headed for the seaside with two members of the UK’s primo surf combo and there was chilli and chips to be had down the boardwalk. You can take the Brits out of the UK... From there it was back to base camp to get titivated up for the big event. 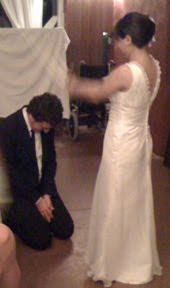 An earlier arrangement to head over to the location of the wedding using public transport was bumped in favour of the international delegation taking taxis to Sant Cugat. What we perhaps should have factored in was that no city cab driver knows how to get there but it was nice to drive around that area of the city, high in the hills and interesting to see that there are more roundabouts up there than there are in the UK.

Our guy kept asking people until we found someone who actually knew the place. Coincidentally I met a couple that were heading to Edinburgh and the lady actually worked in that part of town. She was familiar with the aspect of taxis from town having no idea where anything is up there.

La Masia is a very nice spot to the point of posh but not snooty. The ceremony itself took place in a large conservatory type structure to a sold out crowd. When the bride arrived, The Rubinoos burst into the first of three acapella numbers – a version of “My Girl” that was perfect on so many different levels. A poignant reminder of some sadly absent friends was marked by a performance of a song called “All You Dead Boys” by Harry Coltello. It could have been sombre but it was spiked by an optimism that the politics of everyday life is seldom if ever blessed with these days. This day was not about artifice but kinship and the fundamental importance of that. I was sure that the “Rubes” had performed “Chapel of Love” too but Jonathan informs me that they didn’t. Maybe I dreamt it because it was a dreamlike evening for sure. The other two songs were “With This Ring” and “I Love You”. Doowoptastic!

From there it was time for S + J to run a gauntlet of rice and some fairly fantoosh confetti to the area where an extended alfresco soiree took place that involved a myriad of appetisers and the odd aperitif. It was a great looking gathering (perhaps with the exception of the Brits, ha ha) and coming from a climate where it’s not too common an occurrence to gather outside, even at the height of summer, you’ve gotta dig the balmy heat and the seriously high grade company. The reception was a spread of a magnitude that I have NEVER seen. I’ve been to a few corkers in my time but never one where the couple burst into the hall to zigzag around and through the guests on their way to the top table. Andy Shernoff would have been very proud. 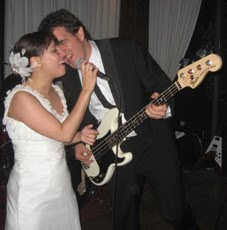 Just prior to The Rubinoos playing, Jon told the story of how the first trip he and Suzy took was to see the band in Italy. I guess the seeds of what went down there led directly to June 4th 2010. And no ash cloud or any other “act of god” could have altered that trajectory. Watching the band, I couldn’t help but feel that it was an enormous privilege. They played what Jon shouted out and I got to thinking that so many acts stick to tried and tested set list complete with repeat banter because they don’t want to look like charlatans. If there was any real justice then this band would have enormodome status. They have the tunes after all and the chutzpah, it was like standing in the set of “That Thing You Do”, belting out that anglophilia as only those Americanos can can. Utterly immense.

And it wasn’t over at that, Suzy & Los Quattro played a couple, just for good measure. The great times were rollin’ like the proverbial juggernaut. When it got to be 4am and it was all over, I thought about what Joey Ramone would say when you were about to leave Paul’s Lounge. “Wha’? Yr leavin’ already!?” in that amazing drawl of his. Truth is that a shindig like this is something that you’d never want to leave given half a chance. Like a “feelgood” Outer Limits episode. 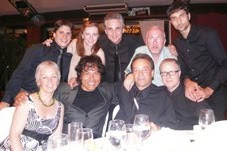 It was a truly great experience and rather than just run off at the keyboard, I have permission to share some of the photos because you know what they say about the image to word ratio.

I ran into many amigos and made a few more – I hope they know who they are and look forward to seeing each and every one of them someplace/anyplace down the road. My sincere thanks to Suzy and Jonathan for counting me in. To be out there havin’ fun in that warm Barcelona sun is a wonderful thing, gimme three cha’s already.

Images from the top -

Sword photoshopped out as BB gets a whupping from his wife
(not really, they were about to cut the cake) - (photo by Osamu Iimura)

The Rubinoos belt it out doowop style (photo by Sissi Wolf)

Pat and Sisuca of top Barca combo The Moviemakers with some old bloke.

The occupants of Table Five (Photo by Anna Fedosseeva/Chris Moscardi)

I was just reminded 'bout this by T. Tex Edwards. I imagine that two members of this fine combo will be attending the upcoming E&A event in Dallas?