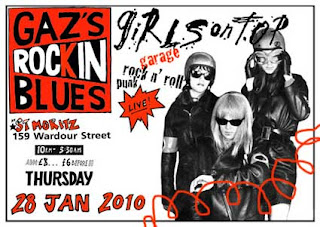 Posted by Lindsay Hutton at 5:41 PM No comments:

Life was much simpler when there was no e-mail and when the post office worked. Blue yonder has “upgraded” its service and as a result the “improvements” will take a bit of getting used to. When you add outlook to the fray then things get even more complicated. To the extent that all of a sudden everything reverts to 20th January and you can’t revert to the order that the mail was in prior to the FlashForward.

As a result, some stuff seems to have vanished so I need to make a concerted effort to sort the mess out. This is kind of the reason that I’m so apprehensive about doing anything with the blog template.

Following yesterday’s news about the Boner/JayZzzz hookup, the dreaded Simon Cowsarse is also threatening a “Haiti” single. What’s wrong with the sterling idea of if you bloody lot keep your traps shut then we’ll pay up? This is the inherent ugliness of publicity in full flow. They can’t stop themselves. “Stars” are lining up to associate themselves with causes, generally assuming that there’ll be a claw back on account of them lending “support”. Maybe I’m just being realistic, er, sorry – I mean cynical.

This is an insidious angle to an altogether more malignant form of greed. The parasitic nature of fame at all costs. Yes. People should give until it hurts but anonymously. Not to bask in the glow of having given. This manifests itself in every facet of the “charity” business these days. That’s what it is – a business. Quite sickening when considered alongside that a lot of individuals are up-ended on a regular basis to soothe the intended guilt trips.

The Cowell horrorshow is at the request of Gogs Broon, the man with his finger on the pulse. For god’s sake man, get a grip. Meanwhile, “back in the States”, some drongo with a truck out Massivechewsets way has upset the Presidential applecart.

“Oh New England”… as one JoJo Richman once remarked.

Bollocks to all that though, I have the Glasgow Film Festival programme to digest. I could think of worse places to be than the cinema if the apocalypse kicks in (old school) between February 18th and 28th.