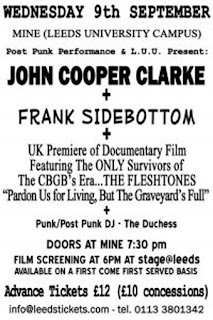 Click poster for all the details of this shindig!
Posted by Lindsay Hutton at 11:27 AM No comments: 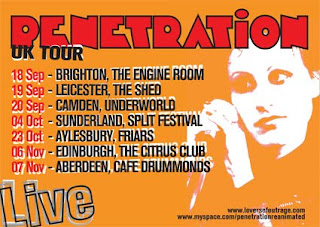 Brother Don's been out on the town in old SF....

"just back from Magic Christian at the Great American Music Hall. they opened for Tainted....excuse me... Tinted Windows. quite a night! after a pit stop up the street at the edinburgh castle (where they no longer serve belhaven... what kind of scot bar doesn't at least have belhaven? i mean, i said, "so you have no beer from scotland at all any more? and the guy says, "we have newcastle". i said, "just give me a bass and some fish n' chips please" anyways...

from there down to the music hall where MC pretty much blew the roof off the joint. drummer clem burke was particularly jazzed. for some reason he was off to the side rather than the back middle and this seemed to quite literally supercharge him... he was tossing his sticks nearly to the ceiling all night (and catching them each time). they did all heir stuff..."tomorrow never comes", "all the stars" among the originals, "anytime at all", "out in the street", among the covers. totally won over the audience which included none other than roy loney. cyril gave roy a shoutout and paul dedicated "teenage head" to him. that was a surprise! they were pretty much in control by the time they got to the DC5's "anyway you want it".

cyril had his trademark dan armstrong plexi while eddie sported a brand new dan electro longhorn bass that looks just like one you would've picked up in '58. cyril used a piggyback fender supersonic amp. paul banged a tambourine and played some great harmonica here and there. they got an encore and did "shake some action" on which they were joined by this guy Mike who came all the way from Pennsylvania. this is the cat from the Parallax Project who cut the Who's "It's Not True" with the band (i think it's on the next album but i'm not sure).

me and tom had a blast hanging with cyril and the guys backstage after. i checked out eddie's bass. it's just like my dano aside from the color and it has different knobs. and it was great talking with roy too. outside afterwards there were tons of chicks waiting for the Hanson guy (who sings for the Windows). and waiting in vain... you should've seen their faces when Cyril told them their hearthrob had long ago left the building via the back door! but Cyril-- ever the crowd pleaser -- hung around and signed everything in sight.

Whilst we’re on the subject, score the upcoming Dirty Water release by Magic Christian here!

It's apparently "Saltire Saturday" here in the daftest wee country in the world. It all has to do with the desperate act that surrounds kicking a ball up and down a park. Something that does not impact on my planet in any way, shape or form. Well hardly ever, it's a pain in the arse travelling anywhere on a day like this. But anyway, coming back from the post office - which was completely dead - I saw this utter bampot that had a saltire motif on his napper. Evidently heading back from the hairdresser. Dearie, dearie me. True pondlife in action. No disrespect to the actual wee beasties that inhabit actual ponds intended.

Things are busy around here and tomorrow, all going to plan, some progress will be made with regard to a project that I've had whispering through my unblazoned head for a long, long time. More on this mysterious happening as and when. Amy and Davie will be continuing with their recording over the course of the week too so hopefully there'll be a whole album in the can by this time next weekend(ish).

I'll be on here trying to play catch up and meeting some of the crew from further afield. Generally doing stuff that doesn't entail heading to the salt mine for 9 whole days. This is a good thing.

You may recall me kvetching some weeks ago now about trying to get Green Day tickets for my nephew. It seems that magically some more tickets have magically appeared. Maybe they fell behind a filing cabinet or something? Aye, right. This bullshit about shows being "sold out" in addition to the inability of their systems to deal with demand is something that needs to be addressed. I urge you to boycott the fuckers that operate in this fashion in whatever way you see fit. Not that we'll actually be able to drive these maggots out of existence anytime soon but it seems like my idea of fun to at least try.
Posted by Lindsay Hutton at 10:07 AM 4 comments:
Newer Posts Older Posts Home
Subscribe to: Posts (Atom)